5 Unicorns That Are Currently In Destiny 2

Since warmind DLC dropped on last month,players obtained fair amount of catalyst to drop throughout the campaign. However,five strike specific catalyst that many players chased after and couldn’t get it to drop. Eventually many players thought it might be bug and given up. The 5 strike specific catalyst are coldheart ,prometheus lens, wardcliff coil, merciless and riskrunner. Currently these five catalyst are considered as unicorns in Destiny 2 because of its rarity.

First week since launch I managed get up to decent power level and was able to farm heroic strikes without much hassle. Glass and blackout modifiers pain in the ass. And so I farmed about 40 heroic strikes along with my 2 friends and none of us get the catalyst to drop. At this time, I thought to myself what if the catalyst was actually bugged and can’t drop. None of the people in forum posted about getting these strike specific catalyst. Majority of the players were actually having the same thought as I do.

Fast forward to 3rd week by this time I already ran about 120 heroic strikes and eventually got 1 catalyst to drop for me. It was prometheus lens and I’m definitely excited. Getting to actually see 1 catalyst to drop means it’s not bugged . Just that the drop rate for the catalyst is extremely low maybe around 1% or less. So I’ve begin to start farming for these catalyst on weekly basis.

The order that catalyst dropped

Pretty sure the order everyone has is random so this wouldn’t be important.

Got this catalyst to dropped for me by 3rd week from constant farming of heroic strikes. Definitely got me excited when a gold/yellow shape thing pops out from the chest. Before this I didn’t know how the catalyst looks like, didn’t really pay attention to those I’ve gotten in patrol. So yeah, my journey to hunt the 5 unicorns begins.

Fastest Way To Complete The Objective: Anywhere that have enemies. I got this when the strikes were in solar singe and just complete mine in the strike runs. 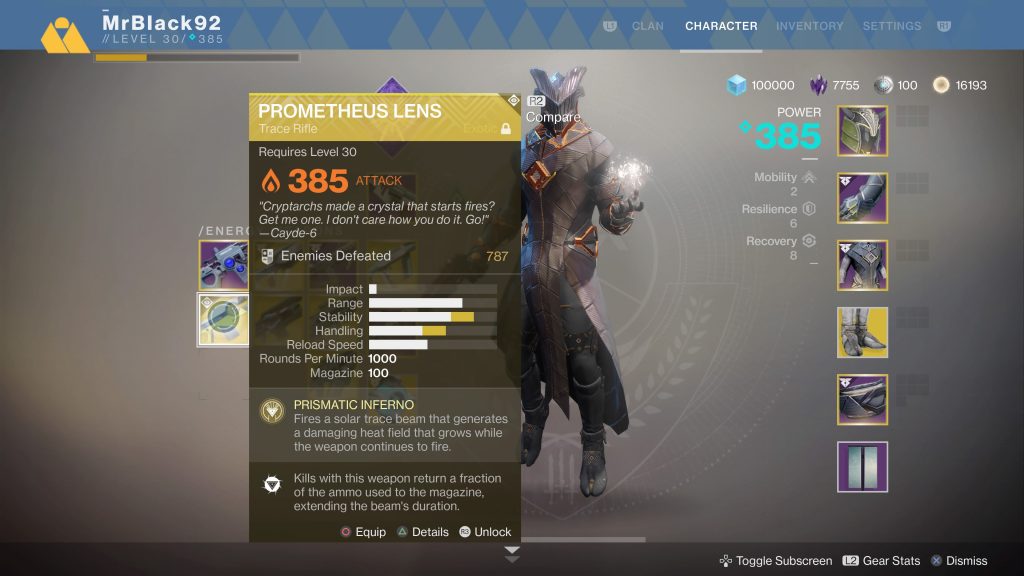 The above image is the masterwork version of prometheus lens. It’s basically increases an extra 10~15% boost of stability and handling. Doesn’t make much of a difference but it’s always good to have those extra boost.

Among the 5 catalyst, coldheart was the one that I’m looking forward the most. Still can’t believe I’ve got this as my second catalyst. At this time round, I was actually helping my friend to farm for silicon neuroma sniper rifle. It’s an exclusive reward from the pyramidion nightfall. We were doing high score run 90k – 110k score run for the nightfall.

Fastest Way To Complete The Objective: Pretty much the same as prometheus lens objective.

Again I’ve obtained this catalyst when I was farming will of thousand nightfall. My friends and I thought the exclusive reward for the nightfall shouldn’t only be a transmat effect. We did high score run 110k for this nightfall. He got wardcliff coil catalyst and I’ve got merciless catalyst. Sadly our 3rd friend didn’t get anything.

Fastest Way To Complete The Objective: Restock power ammo at any available public event and kill nearby enemies. Rinse and repeat. 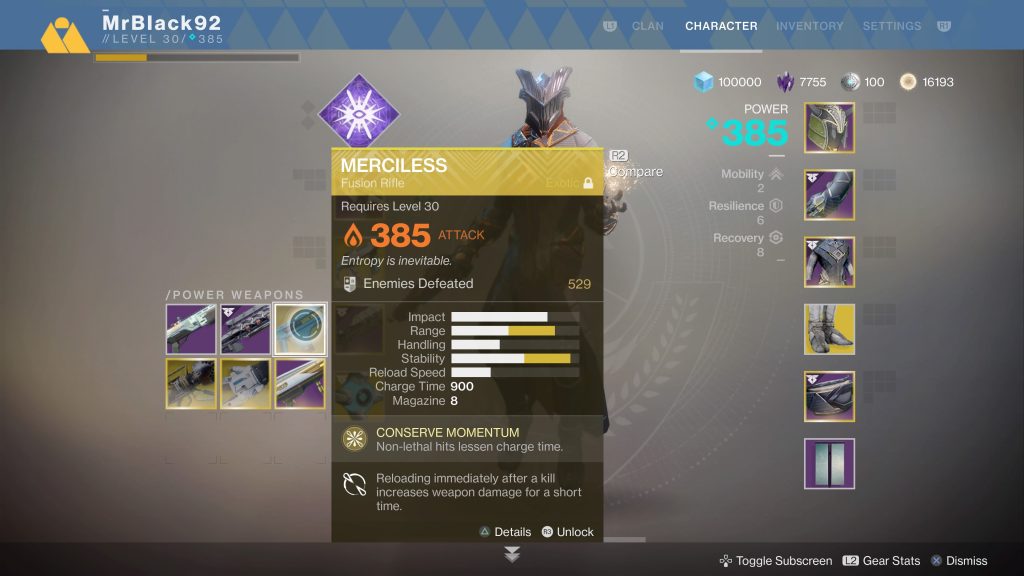 Look at that insane range and stability boost! Just a rough estimation it’s like an additional of 40% range and 30% stability. Didn’t really get to try this weapon after I’ve complete the masterwork but the stability does make the weapon easier to control. There’s a fall of range on fusion rifle so the additional boost does help with the fallout range.

Fastest Way To Complete The Objective: Restock power ammo at available public event and I went to core terminues (mars lost sector) and did my progress there. Lots of thralls and cursed thralls. Alternatively, you can launch escalation protocol and killing the thralls and repeat.

Didn’t really get to test the weapon out since it’s masterwork. All I did was fire couple of shots and the spread of the mini rockets seems to be in tighter spread compared to its original version. Not really a must have because there are some good rocket launchers out there.

At this point since I’ve obtained 4 out of 5 specific catalyst, thought might as well go all in and farm for the last catalyst. Just like Thanos trying to obtained the 5 stones for himself. For this catalyst, I did most of it in speed run and eventually got it to drop for me last night. Ran about 110 plus nightfalls. 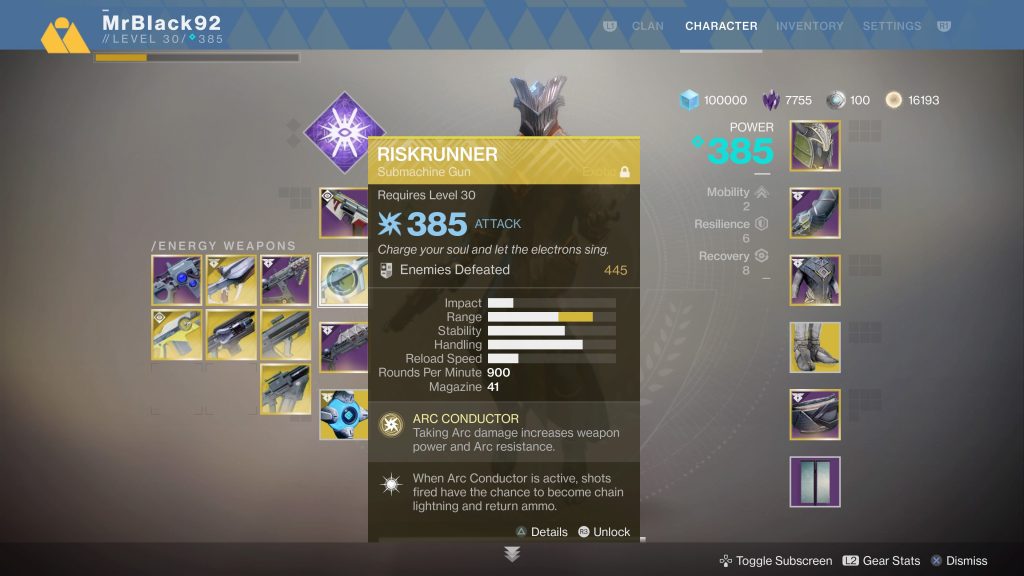 Look at that range! What a submachine gun could wish for. Having additional boost on range helps the riskrunner. Definitely good to have.

Here’s the breakdown of the catalyst farming:

Now that you know all the details about the masterwork upgrades and how to complete certain objective in the fastest way. Most importantly these catalyst isn’t bug so this bring us to the next question.

Which Is Most Efficient Way To Farm?

From the catalyst description itself states that “Found in strikes against the most challenging opponent”. There are 4 types of strikes that you can farm this on. The 4 types consists of vanguard strikes, heroic strikes, nightfall and prestige nightfall.

Vanguard strikes shouldn’t be considered as a playlist choice to farm. Why? Because it’s the lowest power level and hence it has the lowest drop rate among all. Next, nightfall isn’t as efficient as compare to farming on prestige nightfall. This is because there’s a challenge card for prestige nightfall which enables players to use modifiers that provides advantages for them.

Lets go into more details against the playlist comparison.

Following bungie logic, just a general assumption hardest playlist will have better drop rate. So if it takes 20mins to complete a heroic strikes in comparison to 10mins on prestige nightfall which one will you choose? It’s obvious prestige nightfall is the way to go. However, if you are getting bored playing the same nightfall over and over again, you can always switch back to heroic strikes.

There is score threshold in prestige nightfall at 30k, 60k ,90k and 110k. With each threshold players reach, there’s an increase chance of loot at the end of the activity. Bungie only stated that there’s an increase of drop rate but never tells us the exact % of increase. Speed run on other hand is basically skipping through majority of the encounters and take out the boss as fast as possible.

Depending on the nightfall, some can be complete in around 7-9mins whereas a high score run could potentially takes about 12-15mins to complete. If players are attempting for high score run it’s best to try aim for 90k or 110k. Given the amount of modifiers available, it’s easy to hit 110k score. If you want to take advantage of the % of increase drop rate aim for 110k. Once players hit above 110k score, skip the rest of encounter to save time. Bear in mind, prestige nightfall has a decay of 8 points per seconds.

Based on my personal preference, I’m definitely more incline in farming through high score run rather than speed run. But majority of people prefer to speed run despite having lower % of drop rate. Nevertheless, RNG plays a role in the drop rate as well.

What Modifier Should I Choose For Prestige Nightfall?

That’s it for the modifier set up for speed run and high score run. A warlock with lunafaction boots and empowering rift definitely helps a lot. Sunbreaker titan for melting point and tractor cannon are optional. Empowering rift with lunafaction is more than enough. Escalation protocol shotgun, perfect paradox or hawthorne’s shotgun are good choice of power weapons to consider.

So that’s all for the necessary tips and tricks that you need to farm these catalyst. If you have any question, feel free to drop a comment below. Till then, I will see you soon. Good luck on farming!!