Crown of Sorrow: The Only Raid Guide You Need 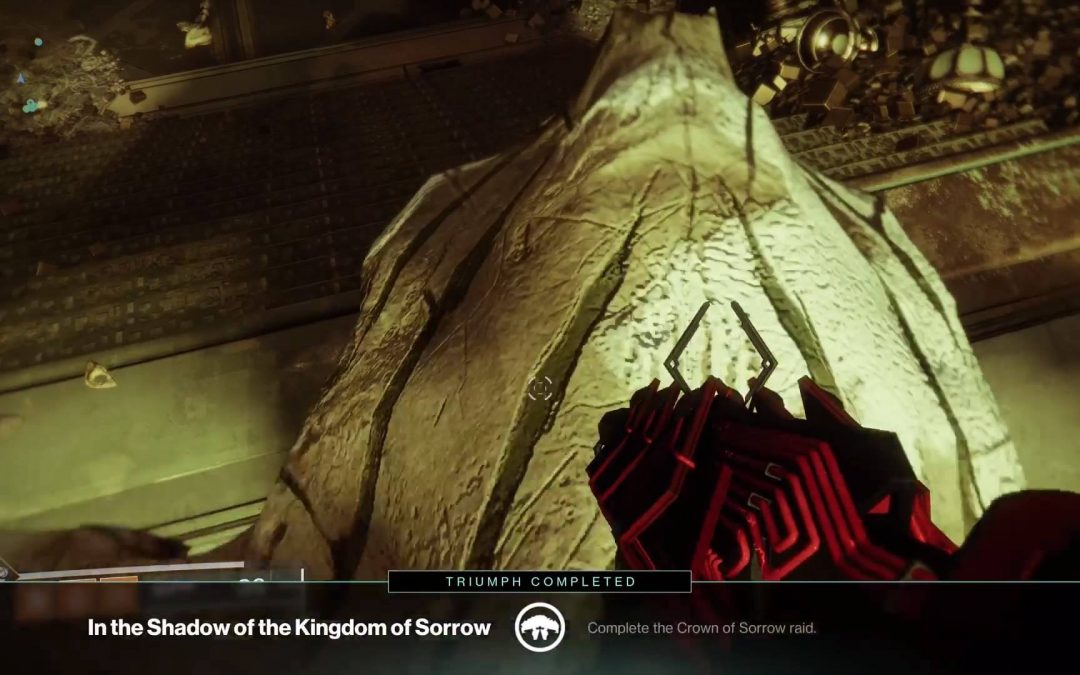 How To Beat Crown of Sorrow Destiny 2 Raid

The moment Gahlran wore the crown, he got controlled by Savathun’s curse and that’s how the hive invasion begins. Here we go, once again we are going back to Leviathan to help Emperor Calus. The recommend power level for this raid is 740 power level and the size of this raid is similar to Scourge of the Past (SoTp) which consists of 3 encounters and 1 jumping section. First encounter for Crown of Sorrow starts at 715 follow by 725 on the next encounter and finally 735.

Here’s the encounters for the raid: 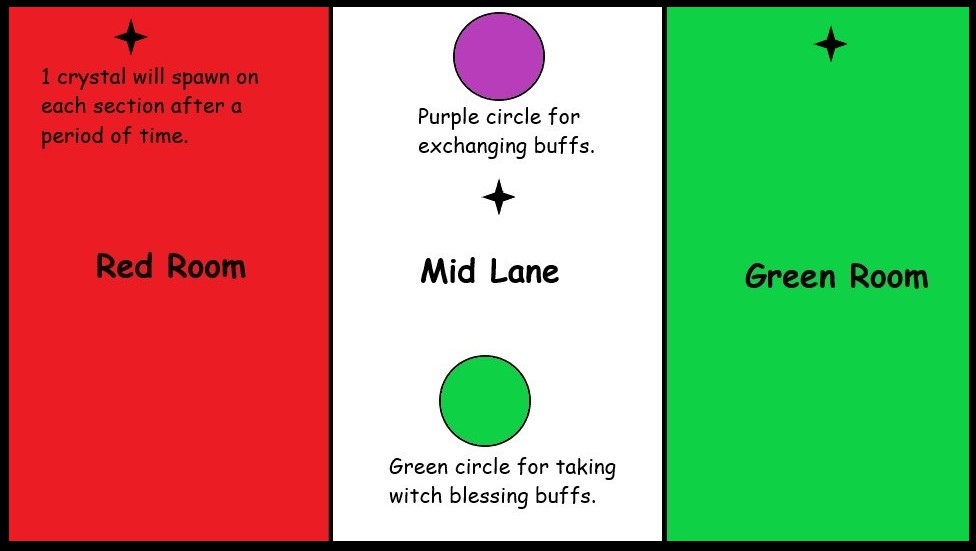 This will be the first encounter for the raid and it’s recommended at 715 power level. First of all, this entire area is split into three sections which are red room, mid lane and green room. The fireteam members will then be split into three pairs and each pair consists of two members. Assigned one member from each section to pick up the witch’s blessing buff. Three of them simply have to hop into the green circle to receive the blessing to start the encounter.

Here’s how you beat the encounter:

This challenge is quite easy and the requirement for it to have less than three people with blessing at all time. Assuming you are familiar with the mechanics already, you will always assign a person from red, green and middle to grab the blessing. However, for this challenge you can only assign red and green room people to get the blessing. Even between the switching buff phase, only the green and red group people will switch the buff. Lastly, just to be consistent with the buff have four of you guys to switch buff every two waves of enemies. Rinse and repeat this until you complete the challenge.

The video below will be the showcase of how our group complete the challenge:

This is a jumping puzzle section which you will all split into a group of 3. Similarly to 1st encounter, have 1 people from each group to pick up the witch’s blessing buff first and. After that, have 2 groups to go for the jumping sections, they will focus on destroying the crystals that spawn on the piston. This crystal has a shield in it so the people will have to be inside the crystal to destory it.

Meanwhile, the last group will help to shoot the crystals that spawn in air. Successfully destroying all crystal on time then have everyone go to the purple crystal to refresh the buff. For every purple crystal that you reach, it will be a checkpoint. Do this for 3 more times and you will beat this encounter. Lastly, the loot for this section is going to be a non-powerful drop. 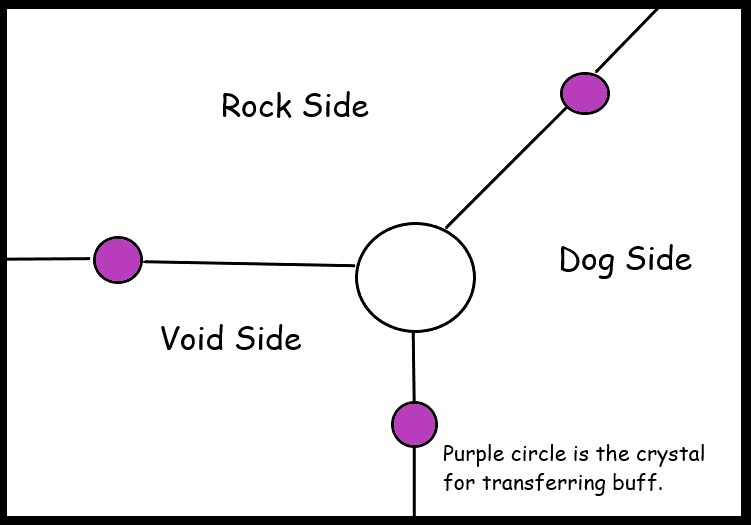 This is the phase 1 of Gahlran boss fight encounter and the recommended power level is 725. There will be new mechanics involves for this encounter but this time you’re going to transfer witch’s blessing buff around players. First of all, the area is going to be split into 3 quadrants which is dog, void and rock. Simply shoot at the boss to start the encounter, and there is going be a random green pool that spawns in one of the three quadrants.

Assigned one of the player to get the witch’s blessing first and it is similar to 1st encounter. Player with witch’s blessing can damage certain enemies and others will be immune. Team coordination and communication is important to keep the ads under control. At this point, the boss is going to spawn randomly into one of the three quadrants.

Next, there will be 2 waves of wizard and acolytes that spawn. After that an orge will spawns and kill it quick before heading to the purple crystal to transfer the buff to 2 other players at another quadrant. Upon transferring buff this means that 2 people on the quadrant will both have witch’s blessing.

With that, the invincible wall is now open and you can move between the 2 quadrant. For now, have one of the people from 1st quadrant (non blessing player) will swap over to 2nd quadrant and vice versa. As a result, this will put 1 player with witch’s blessing and 1 with non blessing in each quadrant.

You will pretty much have to repeat the same process until it is time to transfer buff at the last quadrant. All 6 players will have to go to the crystal to transfer buff. Successfully transfer the buff will open up the last quadrant and starts the DPS phase. Lastly, there will be 2 people with non-blessing and 4 people with witch’s blessing which is what you want ideally for DPS phase.

For example, people on void room gets the witch’s blessing first and the rotation will be going clockwise. In that case, it is going to be void side to rock side then lastly dog side. You will start off with a person that has the blessing then it will passes down to 2 people and final phase is going to be 4 people that has the blessings. It is recommended to have 4 people with witch’s blessing and that way you can go for 4 DPS phase on the boss.

The total victory raid challenge requires you and your team to break Gahlran’s shield for 5 times in a single damage phase. Having anarchy will make this challenge a lot easier. Hence, assign a person with anarchy and make him has blessing towards the damage phase. There is a way to manipulate the blessing in such a way that the anarchy guy will always ends with witch’s blessing.

At the DPS phase, have everyone with witch’s blessing except the anarchy guy break his shield at once. Doing so will leave 5 person with non blessing and the anarchy guy with blessing. The anarchy guy will just have to shoot anarchy shots on gahlran’s body and anyone can punch Gahlran to break the shield.

Here’s the showcase of how our group did the challenge:

For the phase 2 of the fight, you will finally be killing the giant gahlran. The recommended power level for this section is 735 and anything above will allow you to deal more damage. Besides that, the raid mechanics for this encounter is pretty much the sum of all the previous encounter. You will need to apply what you learnt through 1st encounter, jumping puzzle and phase 1.

First all of all, similar to phase 1 stick to the same partner on all the quadrants. There will be a green pool at the middle area, so have 3 players stand in the middle to get the witch’s blessing buff. After that, head back to respective sides and start killing the enemies with your partner. While you’re killing the enemies be aware of the cue sounds which indicates the spawn of a crystal. The crystal can spawn anywhere and it will go clockwise from that quadrant.

Next, while this is happening you and your partner will have to rotate witch’s blessing buff with each other. Long enough to make the mini gahlran spawn, and then you (blessing) and your partner (non blessing) punch the mini boss to take down its shield. Shortly after that you can see the hand of the giant gahlran glows green, shoot it quick and it will take a giant axe to kill that mini gahlran.

As soon as you took down gahlran’s shield, both of you won’t have any buff anymore. So assigned one of the player to make a call out, requesting witch’s blessing for your side. For example, after void side took down mini gahlran then they can make a call out “void side needs blessing”. Then one of the blessing guy from either quadrant can shoot the crystal to give you the buff. Shortly after that a crystal will spawn, once again break the crystal with your partner. 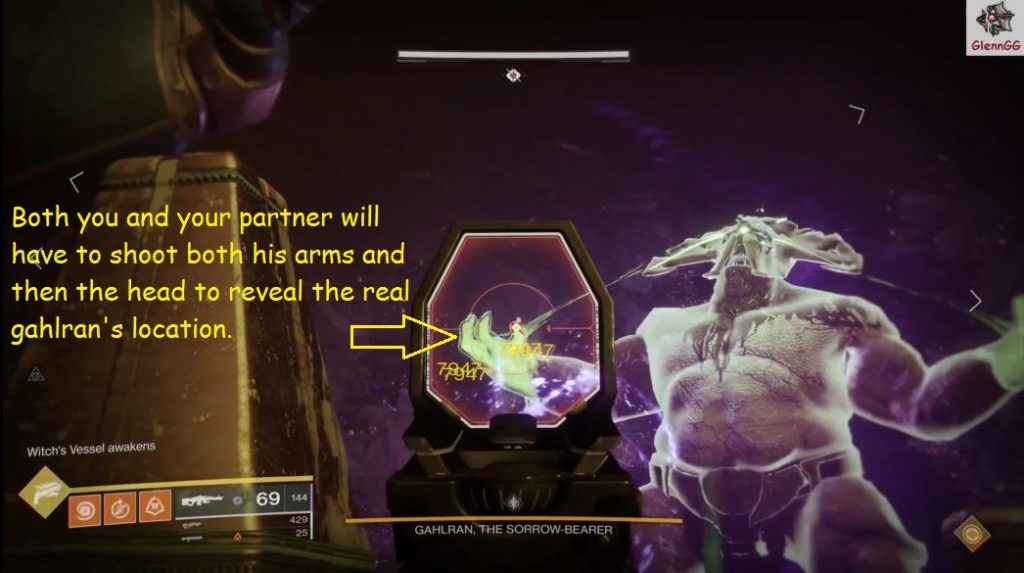 Every group on their side will have to make the giant gahlran axe the mini galhran then DPS phase will begin soon. As shown above, after you shoot both of his arms and then the head, if the message “Gahlran deception subsides” then that is the decoy. Whereas if the boss stays there it means that’s the real boss and one final crystal will spawn beforehand. Whichever side that the crystal spawns, that particular team will have to handle it.

Finally, before going for DPS phase, have all 6 people refreshes their buff again so that you got a full minute to DPS the boss. At certain interval of period during DPS phase, he will try to raise his arms, quickly lower his arms by shooting it. The quicker you lower his arm the more time you have for DPS.

With Both Hands Raid Challenge

The third and final raid challenge for Crown of Sorrow. The only requirement for this challenge is that you will have to assign which hand to shoot between you and your partner. Assuming you pick Gahlran’s left hand then you can only shoot his left hand otherwise you will fail the challenge.

After you and your team successfully reveal the real Gahlran, whichever side he is that team can only shoot his arms. first to begin DPS phase. And in the middle of DPS phase, when he’s raising his hands again have team 2 to lower down his hands. Our group decided to go with clockwise direction. For example, if Gahlran is on void side, the void team will lower down his hands first followed by rock side and lastly dog side.

Here’s the showcase of how our group did the challenge:

With that, this pretty much concludes the entire Crown of Sorrow raid. Good luck on getting all the loots that you need!

If you wish to read more about destiny stuff, visit below: