How To Beat Last Wish Raid

Last Wish was one the so called “big raid” that was released during Forsaken DLC. Since the DLC is a huge expansion hence we get a rather big raid for this. Firstly, last wish raid takes place in the dreaming city whereby we have to fight against taken enemies. Riven, the last ahamkara dragon was presumably turned into a taken. Apart from that, kali and shuro chi the two techeuns were turned into taken bosses as well.

In this raid you can expect the techeuns and riven were gonna be the bosses among the encounters. It consists of six encounters and you will use back some of the mechanics from time to time.  Secondly, for new players it is important to get transcendent blessing mods to help you in this raid. Transcendent blessing mod increases the damage you deal in the Dreaming City by 5%. Thus, if you equip the mod on all your armors that’s a 25% damage increment there.

The only way for you to get the transcendent blessing mod is by completing purification ritual queen’s bounty. From time to time you will get the bounty and each bounty has a random objectives that you have to do to complete it. Lastly, the recommended power level for last wish is at 550 power level and it will scales up to 600 at the final boss. Once you’re ready with your armors and weapons you can begin to tackle the raid.

Here’s the encounters for the raid:

Kalli will be the first boss that you will be facing in the last wish raid. Surrounding the entire area there are going to be four pairs of symbols. Next, there will be three pairs of symbols surrounding her and that’s the symbols you want to get with your fireteam. For every symbol that you will, you will open a door during DPS phase. It is important that you get all the doors because you will need to hide inside when she does her wipe mechanic during damage phase. 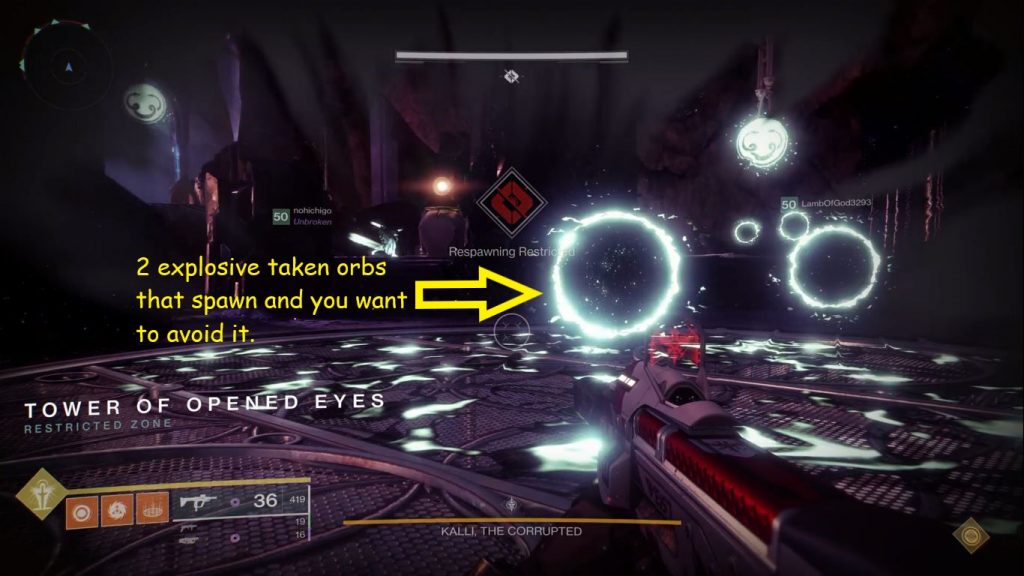 After you assigned your symbols among your teammates, step inside the plate to start the encounter. These two orbs will spawn from time to time and you will have to section that don’t have the orb. Repeat for three or four times until a taken knight spawns.

When the taken knight spawns, take it out quickly and help out other teammates. If they don’t need your help, then you can head over to middle area and ready for DPS phase. Alternatively, if you see the message “Kalli conceives an ontological weapon” that’s also the sign of DPS phase will begin soon. 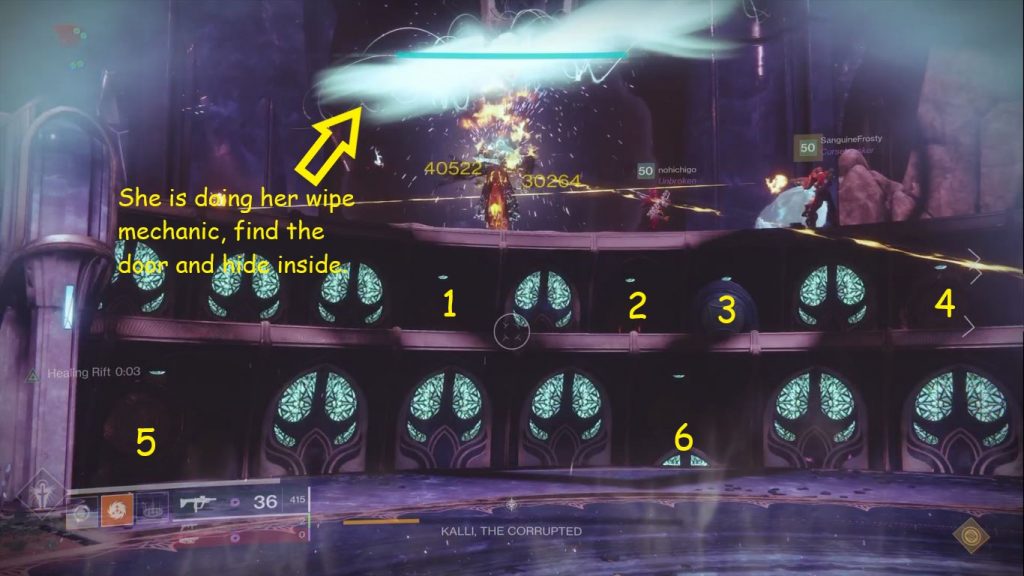 During the DPS phase, she will moves in the area for three times before it concludes as a DPS phase. In the middle of damaging phase, she will begin to raise her arms and that’s her wipe mechanic. Shortly after that, you will see some of the doors below her will open. Quickly go inside the corresponding door and hide. Our group assigned the number of door you take based on the fireteam rooster. So, for every symbol you get, you get door. Hence, you see six doors open during damaging phase. Finally, with the proper weapon loadouts you can easily one phase this boss.

Shuro Chi is the next boss you face after defeating Kalli. In my opinion, this encounter is the hardest among all. Hardest in the sense that you’re racing against time and it requires a flawless execution in the puzzle room. Most of the groups will spend some time on this part if the coordination isn’t that great.

First of all, Shuro Chi has six segments of health and three sections for the entire encounter. So every section will take out two segments of her health. To begin the encounter, simply have everyone get close to the door. There are going to be waves of enemies that spawn and clear it quick until you see three crystal spawns around her.

After you picked up the crystal, jump onto the plate and shoot it to your teammate on the right. The three of you will form a triangle which will then break shuro chi’s shield. Similarly to Kalli, you will have time limits to deal enough damage to make her teleport enough. You can only reduce one segment of her health per encounter. 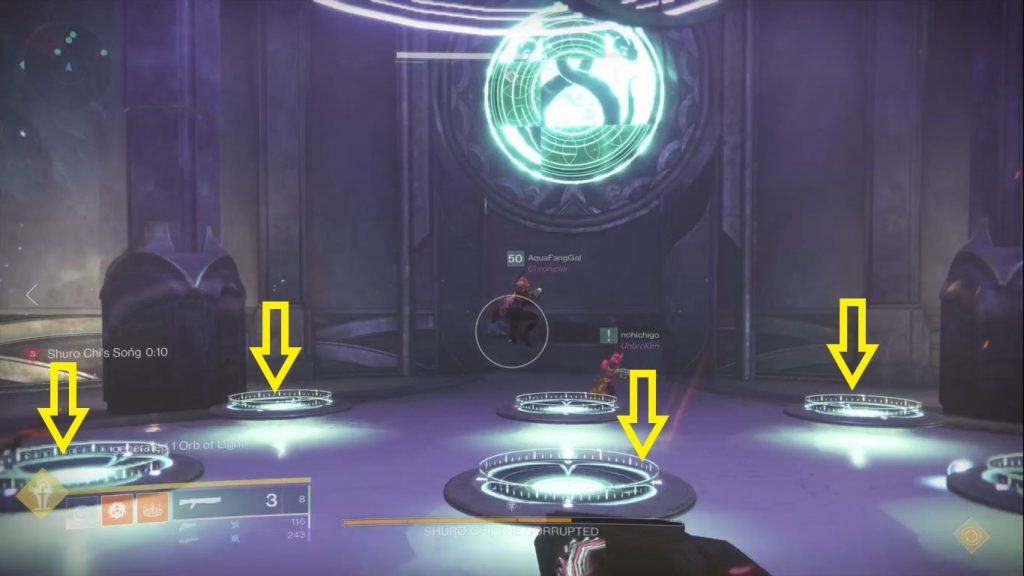 After 1st and 2nd encounter with shuro chi, you will get to the puzzle room. Inside the room, there will be nine plates but you only need to get on the four plates to solve the puzzle. Prior starting this fight, it is important to assign the number among your teammates. In this room, team consists of two people in charge of clearing ads and four people to solve the puzzle. 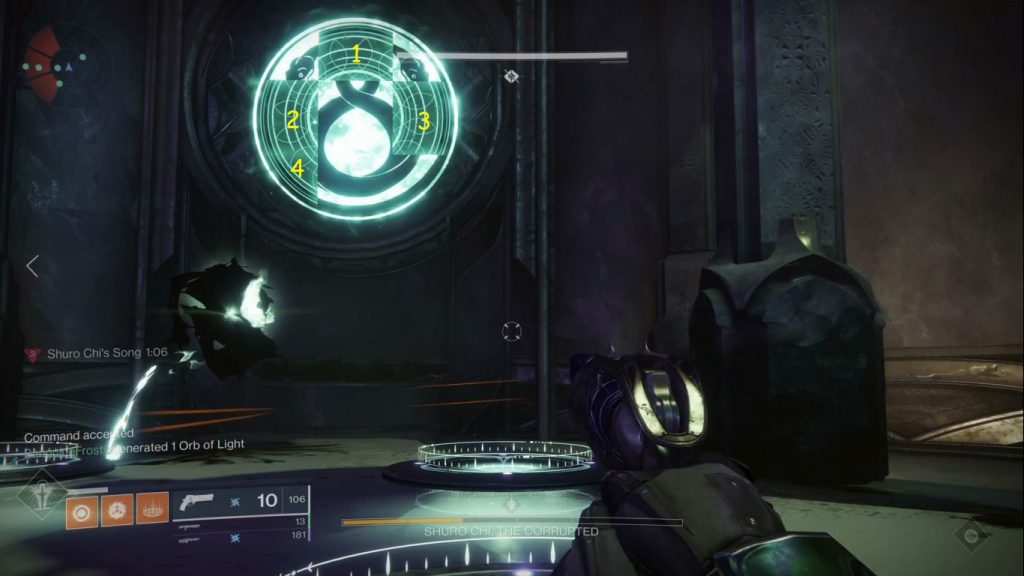 First of all, you will be required to solve three puzzles before you can proceed to the next section. The puzzle will be something like what you see on above and you will need to fill up the missing parts. Just like how you read a book, the flow goes from left to right. And that’s how the number you assigned earlier played the part. However, bear in mind though one person cannot stand on the same plate twice. In that case, you can swap with other people. 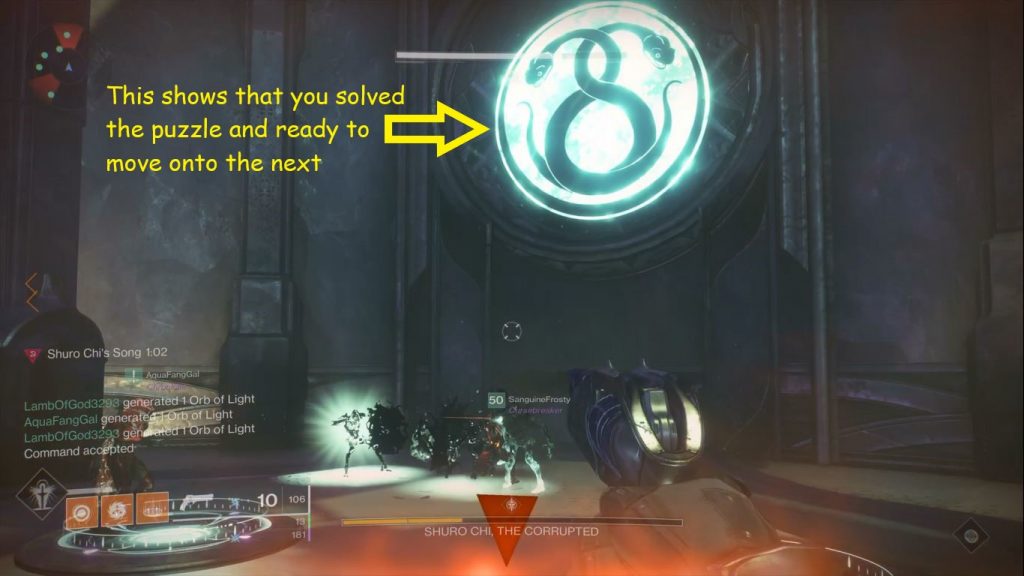 When you successfully solve the puzzle, the picture glows and you can see the message “command accepted”. Shortly, after three platforms will appear which you can jump on and move to the next section. Keep repeating until you reaches the final section. That’s where you will have to kill shuro chi to finish the encounter.

Here’s the showcase of video:

The third encounter which is Morgeth, the Spirekeeper. Morgeth is a giant orge but with unique mechanics involved before you could damage it. For this encounter, our group assigned three people on left and right side. The requirement before being able to begin dps is that your group have to cleanse at least twice.

Bear in mind though, while everything is going Morgeth will slowly grow in strength. So, the quicker you get to dps, the more time you will get. Otherwise as he grows stronger, he will become tougher to kill. Lastly, when he reaches 100% strength, the entire group will be wipe out.

For left side people:

For right side people: 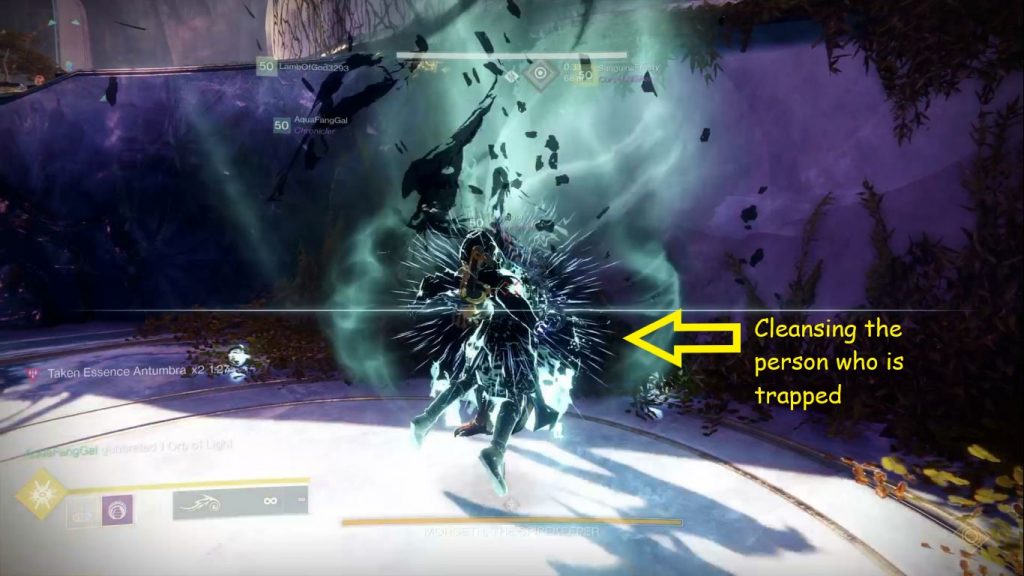 In order to cleanse, you will have to kill the taken captain. It will either spawn on left or right side, kill it and grab the eye of riven. When the person with two taken strength gets capture, you will run up to him and use grenade button to cleanse him. 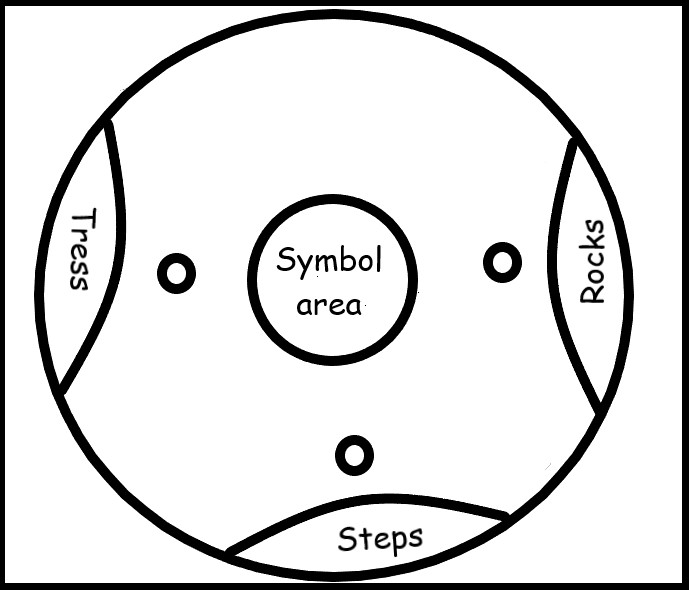 The 4th encounter for this raid is the vault. Firstly, the area of the layout consists of tress, steps and rocks. So, split the fireteam into three groups. For every group, there will be a guy who is in charge of reading the symbol and runner while the other guy in charge of clearing ads. After you start the encounter there will be taken energy in every small plate. Each side will have a designated runner and each will cleanse on the correct side. Successfully cleanse all the three plates will consider as one cycle. Repeat this for two more times to beat the encounter. 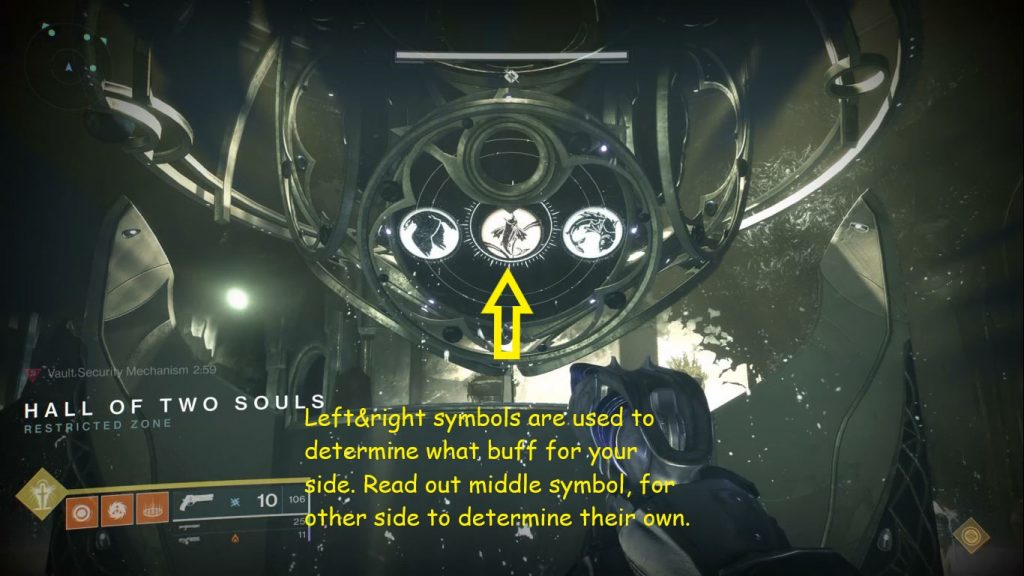 Begin this encounter, by having the runner step on the small plate. Shortly after you will see three symbols appear. We usually let the step side make the callout first. The person will then call out his middle symbol while you or tree side person will got that symbol either on your left or right. For example, step callout n-fish which is my right. After I mark it right, I will then call out my middle symbol it will be either step or rock side. Once every determine the side, we will begin clearing ads until the taken captain spawns. Besides that, penumbra is for left and antumbra is for right.

Pick up the orb dropped by the taken captain and you can determine what buff you’ve got. Only one of the two sides will be open, go towards the side that is open to save time. You will die if you take too long as the taken essence will build up. Head over to your corresponding side and cleanse it by pressing grenade button. 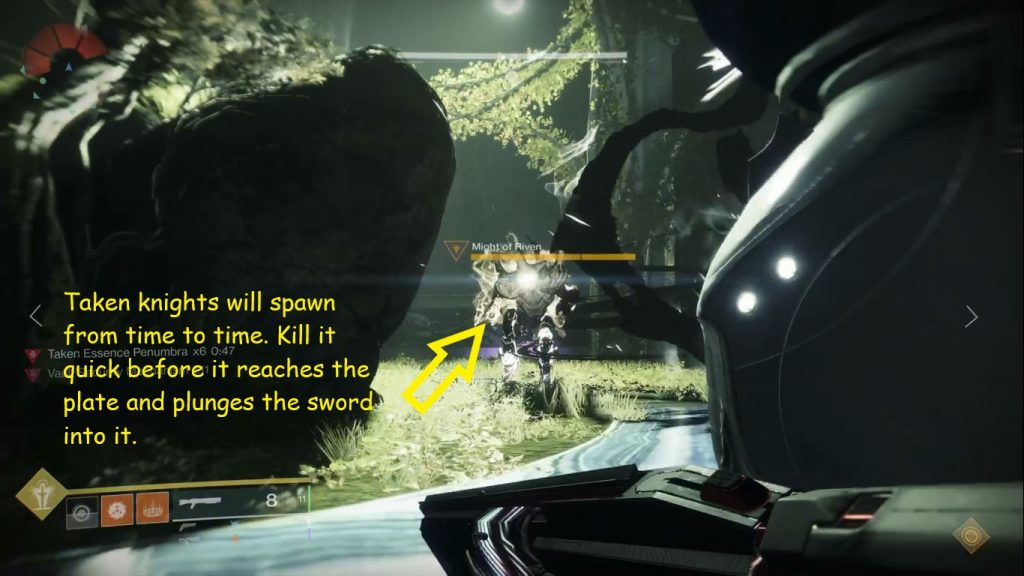 Shortly after you cleanse the plate, there will be a might of riven spawns (taken knight). Kill it quick before it reaches the plate and plunges it sword into it. That is basically the wipe mechanic performed by the knight. The number of knight will increase by one every time you cleanse a side. In other words, on the last cleanse there will be three knights. Lastly, after you take out the knights and cleanse every side and that concludes one cycle. Repeat for two more cycle to beat this encounter.

Here’s the link I used to mark my callout, The Vault.

The showcase of the video for this encounter:

Presumable this is your last encounter for this raid, with Riven there isn’t much mechanics involved. This is because you can simply burn her down with rocket launcher. It relies mainly on burst damage and that’s where the transcendent blessing mods come in handy.

Here’s the showcase of video:

After you defeat riven, this will be the final encounter whereby you have to take her heart and bring it to Kalli and Shuro Chi. The heart will randomly choose one person to have “fate chosen” buff. Only that person can grab the heart to start the encounter. Here’s when you grab the heart you will get a 15seconds timer.

Make sure to start countdown at 10seconds onwards. This will let the people in other dimension be ready to grab the taken orb which extends the timer for outside group. Also, the people who walked with the heart person will know when to back out. Otherwise they will get teleport together with the person into other dimension and failed the encounter. Lastly, with this encounter you’re able to extend the timer one time and one person get teleport in the next.

Finally, if your team is efficient and quick enough you will only need 4 or 5 person to make it to the techeuns. Here’s the map layout that may help you to understand more, Queenswalk.

With that this concludes all the encounters for last wish raid. Good luck on getting the one thousand voice from the chest!