Pits Of Heresy: A Comprehensive Guide For Beginners 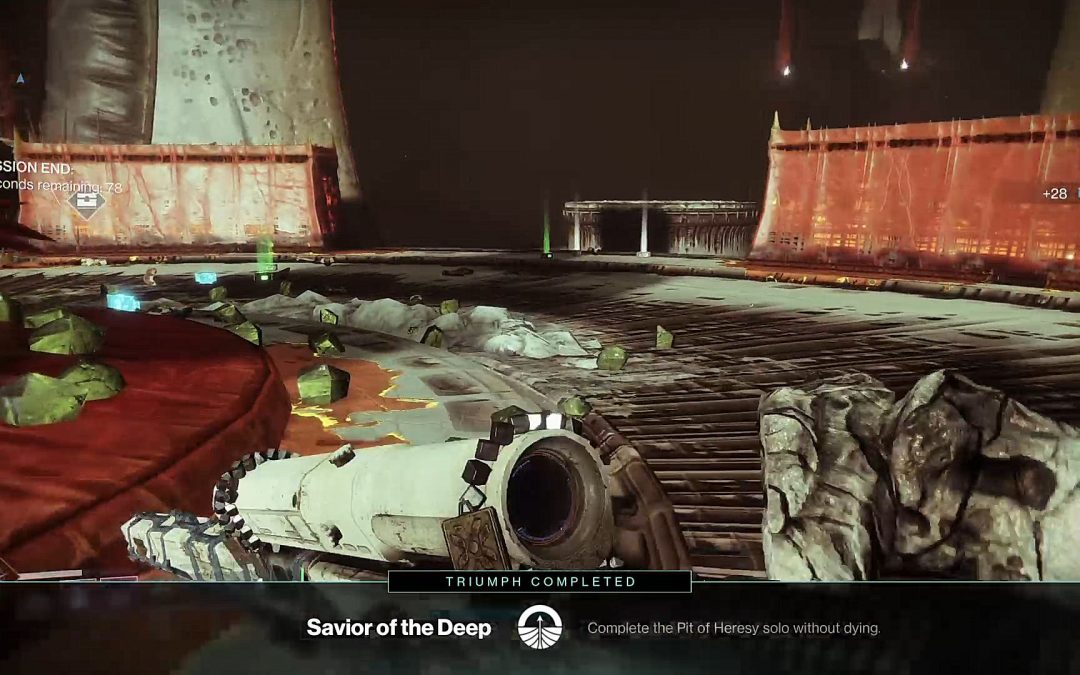 Pits of Heresy is the new dungeon that is part of Shadowkeep expansion. This dungeon is similar to Shattered Throne that we had during Forsaken expansion. It has three encounters that rewards loot for clearing it. First two encounters reward only powerful drop while the final boss rewards pinnacle loot. The pinnacle loot is always going to be a masterwork armor so you can either use or dismantle it for infusion materials. Lastly, the dungeon is located on moon and the recommended power level is 940 and above.

Without further due, here’s the encounters for it:

Simply rally the flag before starting this encounter. Your first priority should be finding that symbol. That is the symbol that spawns the giant hive knight that drop the sword upon killing it. When you’re heading to the area, be sure to clear out the enemies first before going into the room. After you kill the knight, pick up the sword and look for the three hive locks on top of the pillar. You can easily find the symbols surrounding the area.

Each symbol can either be hive wizard, knight or shrieker. These enemies requires certain attack from the sword to damage it. So, every time you kill one of these enemy you unlock a hive lock. Finally, you should be able to see a green light shines into a tower. Just head over to the tower and kill all the enemies that spawn and that should be it for the first encounter. This encounter is by far my favourite encounter of all. I call this the hide and seek encounter. Basically, you got to dunk a total of three orbs , one in each pathway while avoiding the ogre that you can’t kill. For this encounter, there’s going to be one ogre guarding each pathway. The main objective for you is going into caves and find hive knights and kill it. It will drop an orb upon killing and you will have to take the orb and extinguish it outside the gate.  As soon as you extinguish three times, this encounter will be over. For this encounter, you will need to extinguish the orb for six times. Every time you extinguish an orb, a hive lock will disappear from the door.  Whenever the totem turns red just quickly step into the area for a while otherwise the whole team will wipe. Curse of suffering will start to build up and the higher the stack, the more damage you will take from the surrounding enemies. You can cleanse the curse by extinguish an orb. 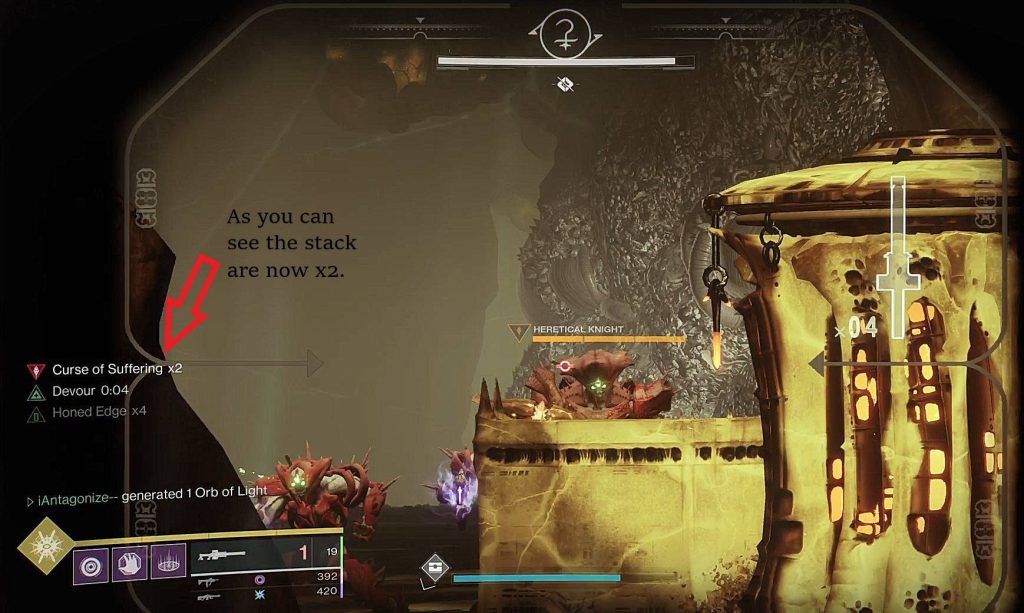 Have one people stay at the middle and two other people move around the area to kill the knight. The hive knight will drop an orb which you can use to extinguish it. One thing to keep in mind is that for every orb that you extinguish, two hive boomer will spawn on the top ledge. Always prioritize taking out the boomers first before concentrating on the enemies. Do it for six times and you shall see “suffering has ended” message pops up which indicates the encounter is done.

As you drop down below, be sure to take a moment to look at the symbols that appear on the wall. Those are the symbols that you will need to find in surrounding the area. In comparison to the first encounter, this is a simpler version of it and involves more jumping. When you find the correct symbol, there will always have a hive wizard and few alcolytes that guard the area. Simply kill the wizard and the symbol at the tower will be gone. Similarly to the first few encounters which you will unlock hive lock for every wizard you kill. 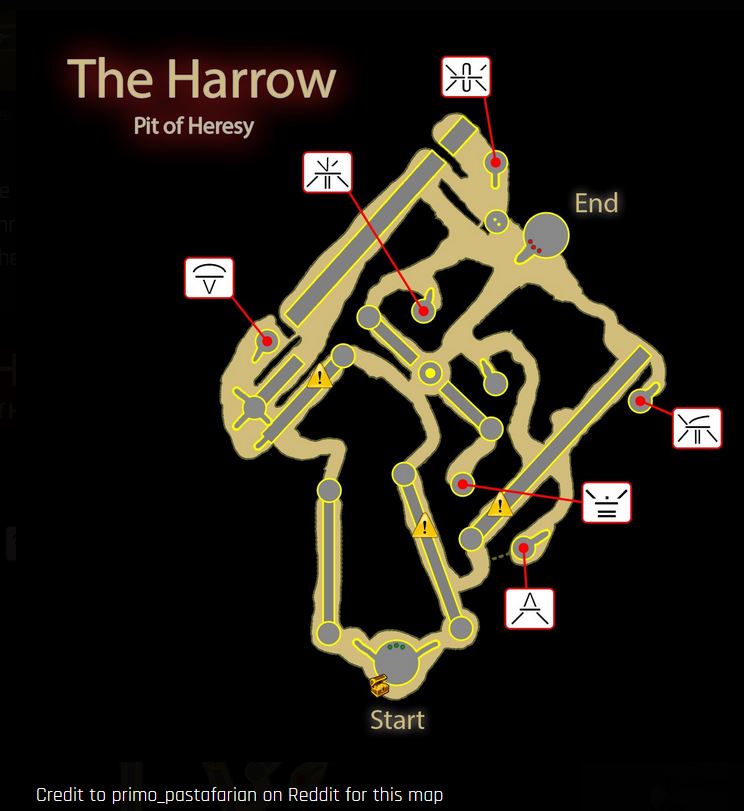 This is the entire map layout for this area which you can refer to find the corresponding symbols that you need. For those who are attempting flawless, be sure to always plan out the safest route to take. 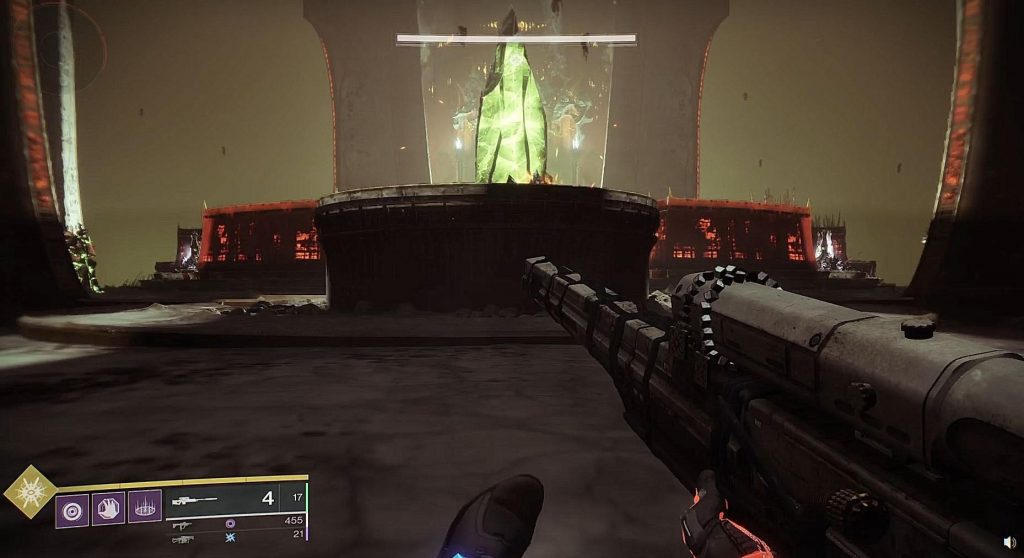 This is the final encounter for this dungeon. The mechanics for this boss fight pretty much includes everything you had learned so far. In each tower there’s going to be one special enemy guarding the tower. You will have to kill the giant hive knight and use the sword to kill the special enemy. After that it will drop an orb which you take and dunk it in one of the middle area surrounding the boss. Repeat this for three times and damage phase should begin. As soon as the floor glows green this means that damage phase starts. In order to damage the boss, you will have to be inside the area. Apart from that, cursed thralls will spawn and be aware of it.

Weapons Recommendation For This Dungeon:

Last but not least, here’s are the few choices of weapons that I would recommend just to make this dungeon easier for you to do. Besides that, having hive barrier and armaments mods can be a bonus for this. This entire dungeon is all about the hives so those mods can be useful in certain situations.

The above will be some of the weapons that I personally found to work effectively for this dungeon. Also, if you’re a first light destiny players I do have a detailed guide that can be useful to you. If you wish to read more about it, simply go to here. With that, I wish you could beat this dungeon smoothly without any problem.