Step by Step on How to Obtain Malfeasance 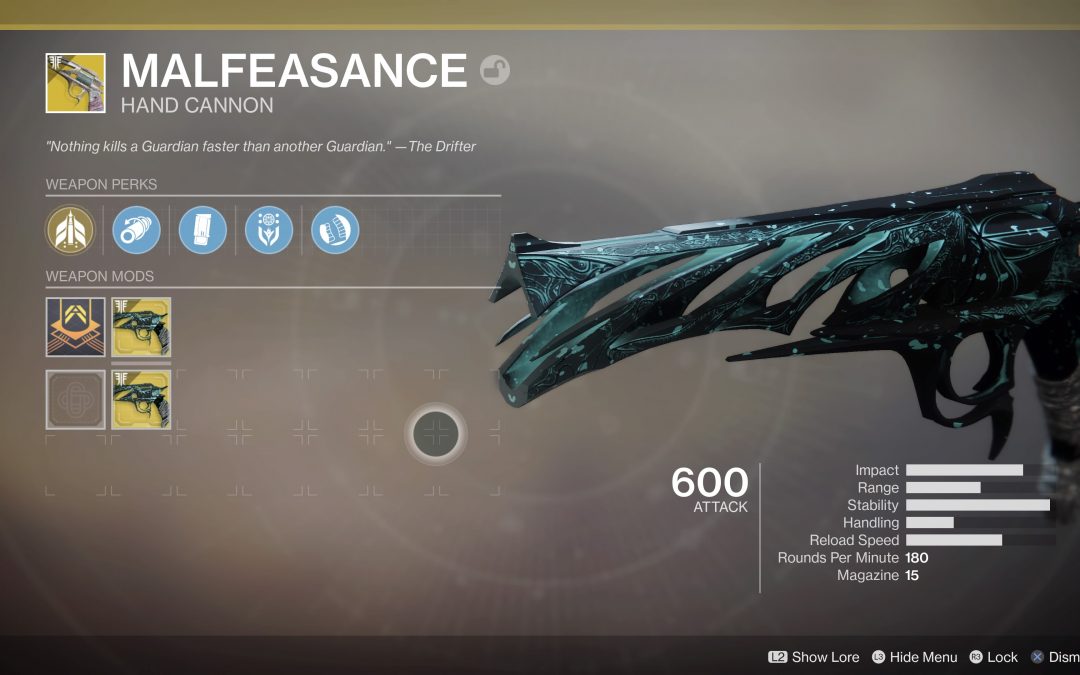 Step by Step on How to Get Malfeasance

For those players who are new to the game, dreaming city is in a 3 week rotations of different types enemies. The rotation goes from scorn, hive and taken. What are the major changes that people can see? If the week is on scorn enemies, players will face a scorn boss in Tier 4 Blind Well. Same thing goes for hive and taken week. Among the 3 weeks, what players want to know is that especially during taken week, there will be a special boss that spawns in Gambit. 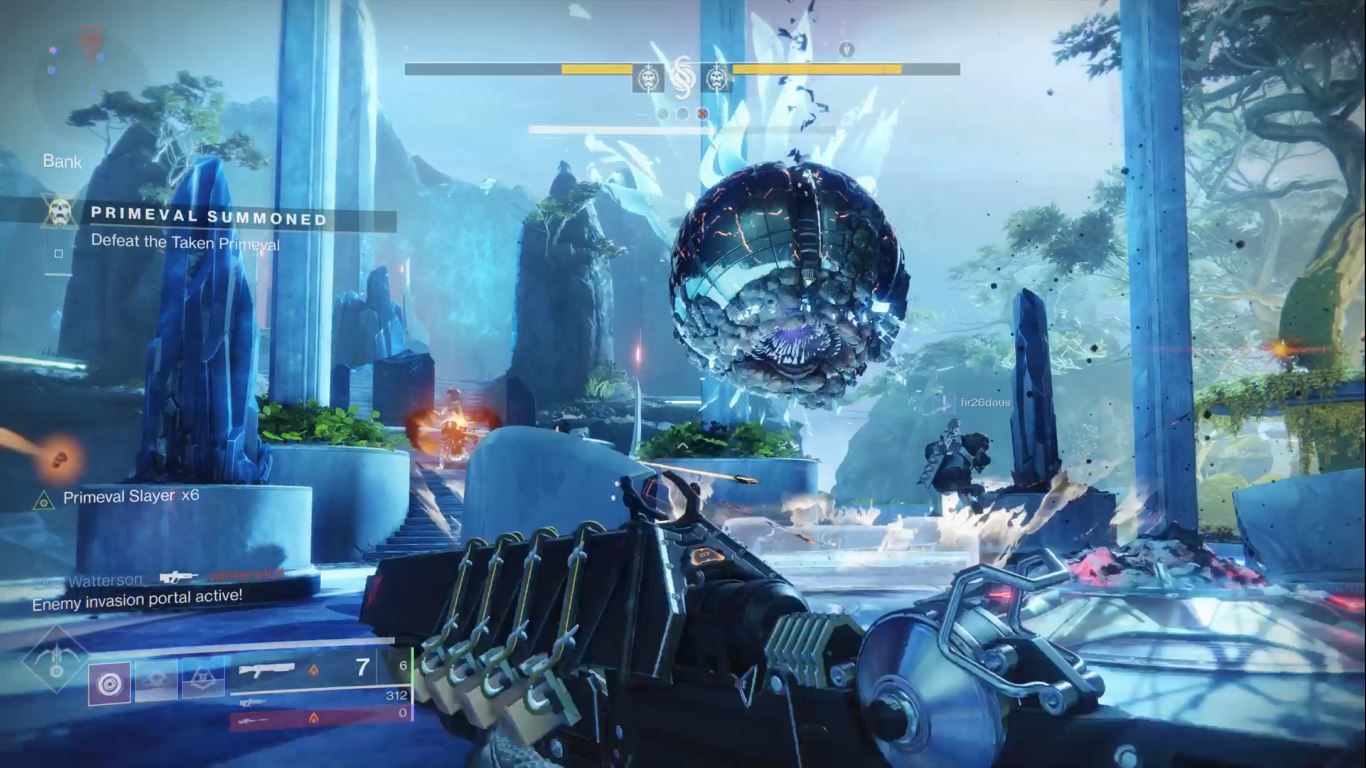 The special boss is none other than the Ascendant Primeval Servitor. In fact, you may have seen this boss in the last campaign mission and Blind Well too. This primeval is slightly stronger than other primeval you have ever face. Be caution when approaching the boss.

After taking down certain amount of health, the boss will summon out tether point which shields it from taking damage. What players have to do is destroy the tether point. It is pretty much the same mechanics in the campaign mission and blind well.

This primeval will have roughly similar chance of spawn rate as other primeval boss. Including this boss there are a total of 5 bosses in Gambit which gives roughly 20% chance of spawn.

Let’s get started on how to get the Malfeasance questline:

The first step in getting the Malfeasance questline is by defeating the Ascendant Primeval Servitor. Upon defeating this boss it will drop the seething heart quest step for players. It is a guarantee drop from the boss. Bear in mind though, both of the teams will get the same boss and it can be a very intense gambit match. 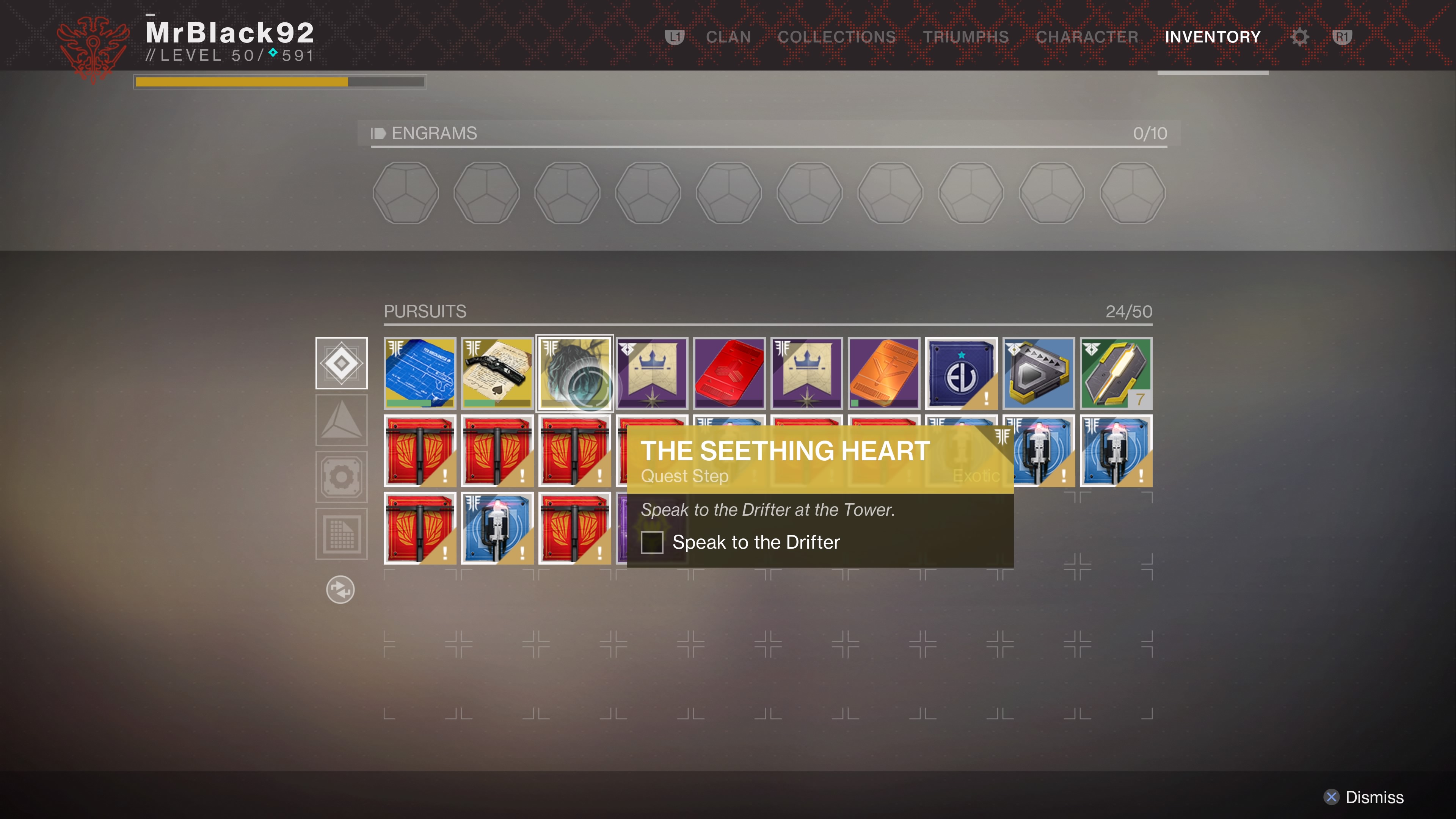 Once you get the seething heart from the boss, head back and speak to the Drifter. This will officially begin the questline of the exotic hand cannon Malfeasance. He will be the guy who is in charge of the quest. 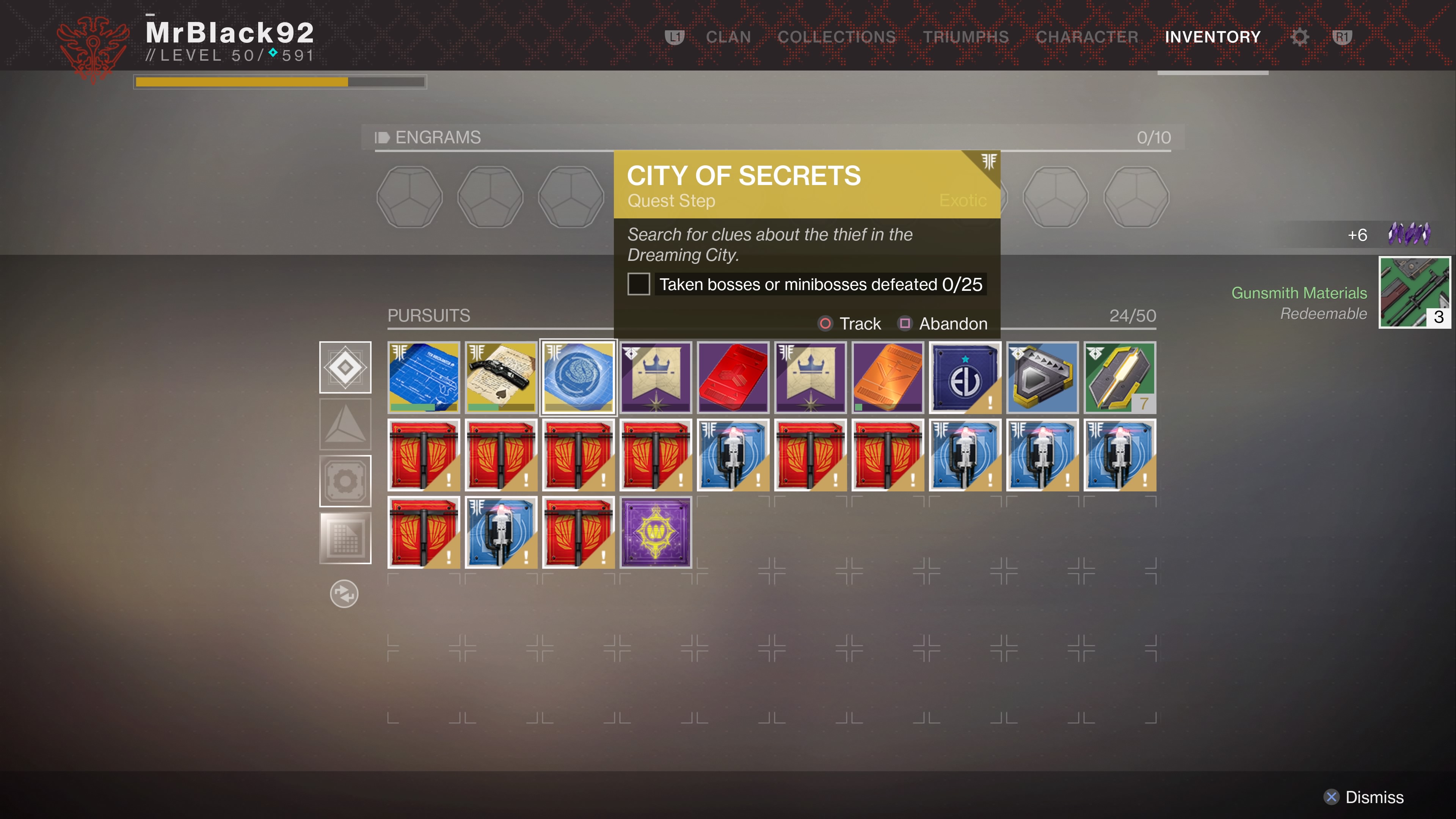 2nd step of the quest requires player to defeat 25 taken bosses or minibosses. This is can be done fairly fast. Just head up to the entrance to blind well, at there wait for the message enemies going up against each other. Once you see that message pops out, in that short span of time, take will be fighting against scorn enemies.

Another alternative is to head into Blind Well and kill the bosses in it. This method is certainly longer than the first one. 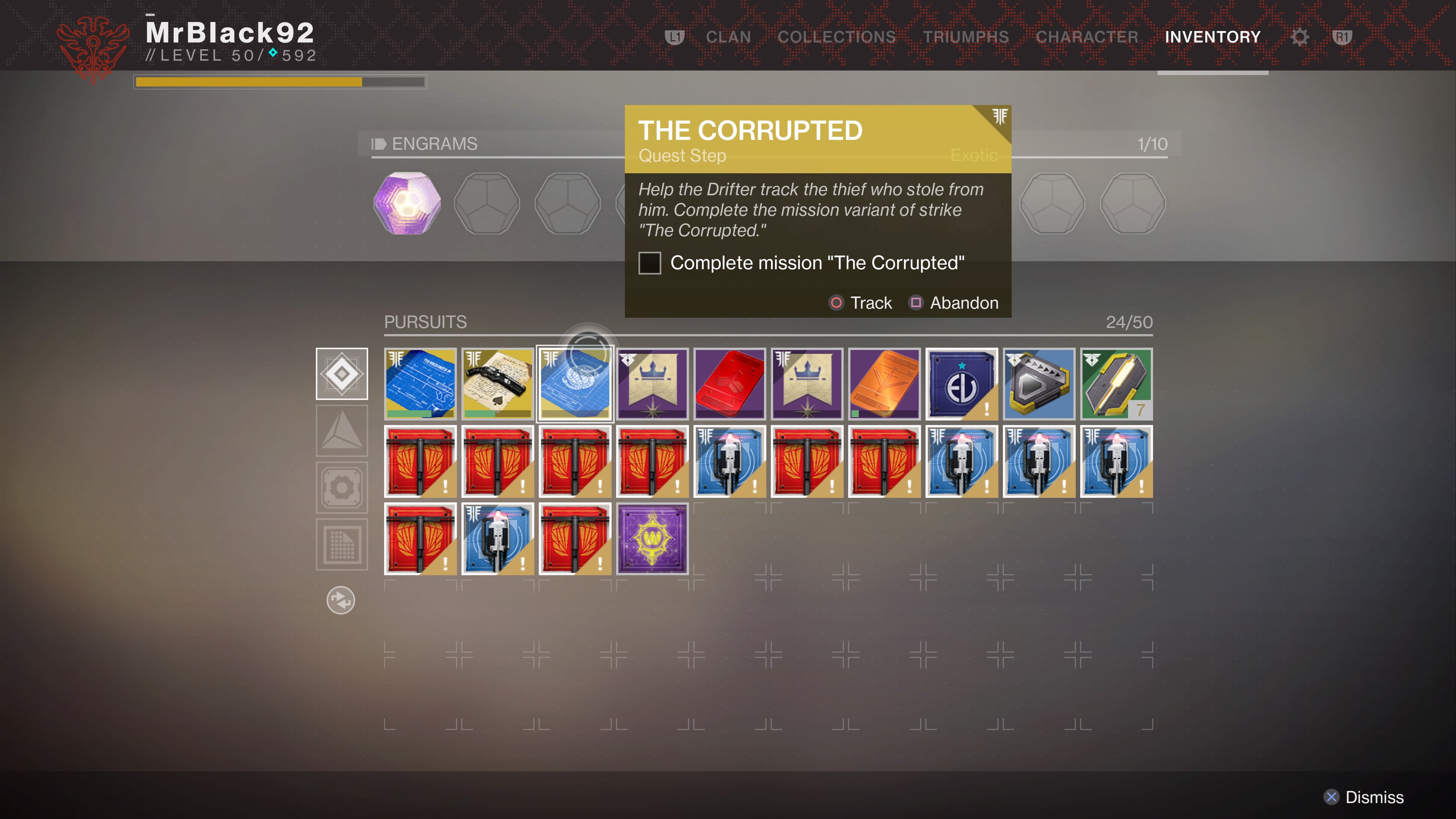 Upon completing 25 taken bosses, the next step will be having to complete the mission “The Corrupted”. This Corrupted strike is slightly different than the usual strike that you did on the playlist. 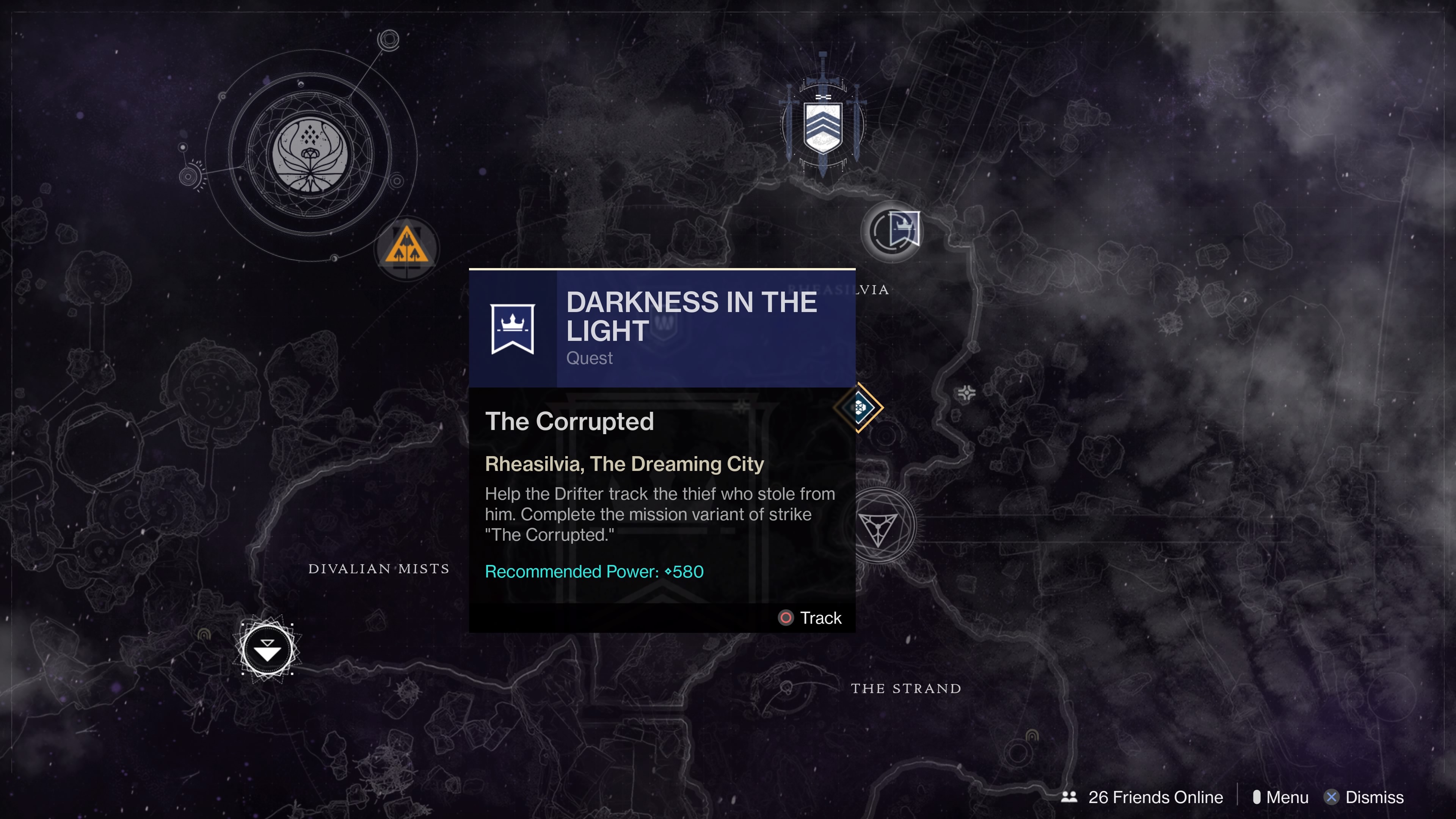 This mission itself is higher power level than nightfall and it’s tough to solo. Use LFG to get people that are on this step or get your friends to help you out. Most of the enemies have shield in this mission and they are pretty strong. The pathway for this mission is different than the corrupted strike pathway.

Make your way to the end of the mission and kill the taken boss. From there you will find out more of the lore about Callum, the guy who got shot by golden gun. 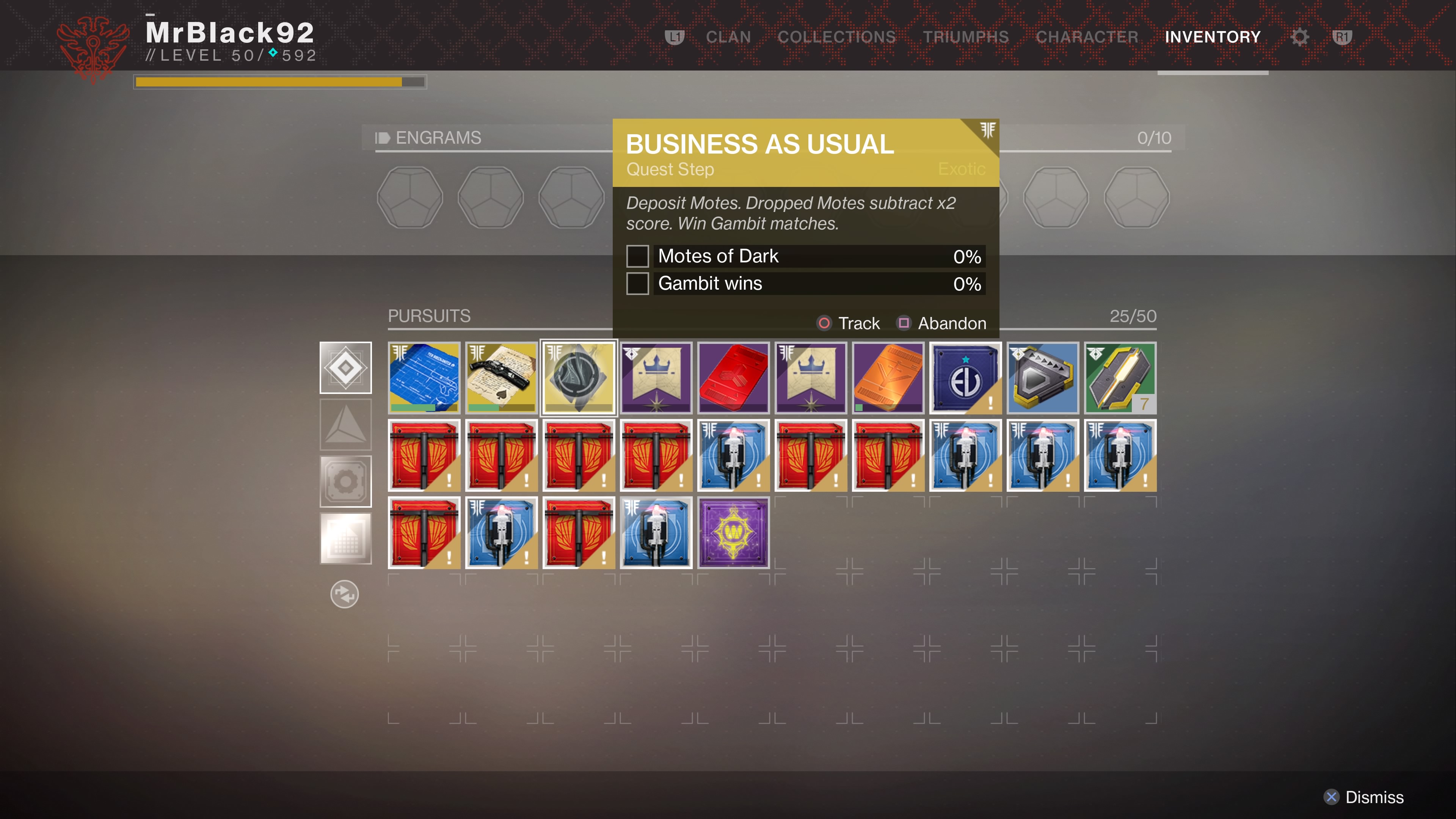 Fourth step of the quest which requires motes of dark and gambit wins. This is possibly the longest step among the quest line. Players are require to win 10 gambit matches and bank in about 400-450 motes.Quick tip on progressing the motes of dark is never hold too many motes!! Just to be on the safe side, always bank in small amount of motes.

Don’t be greedy and hold up to 15 motes to bank in. Chances are invader will invade and you will be their number 1 target. Especially on this step losing the amount of motes will double the motes you lost. For example, you got 5 motes and die, this will instead become 10 motes and deduct from the progress you made. This step will take several hours to complete. 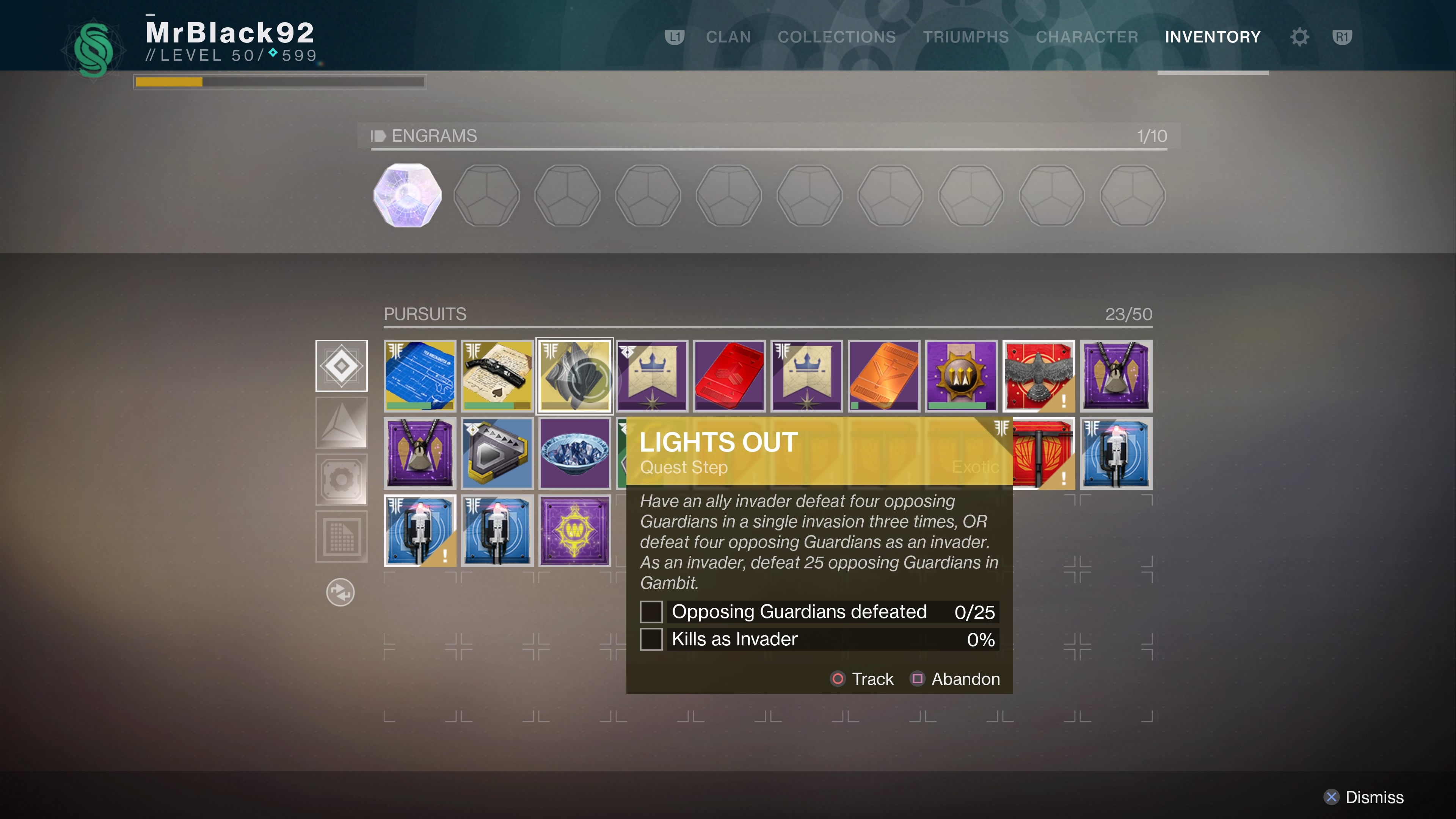 For those who don’t know, army of one means wipe out the entire opposing team. Quick tip on how to score army of one, if you’re invading be sure to have power ammo with you. As an invader, keep in mind that you are literally 1v4 (opposing team member). Having power ammo will help take out 1 or 2 opposing team easily and the rest can be kill with primary or shotgun.

I have been invading a lot during my Gambit career and I finished this step in 2 gambit matches. For opposing guardian is just having to kill the opposing team or kill the person who invades your map. Of course, invading will progress the quest faster. 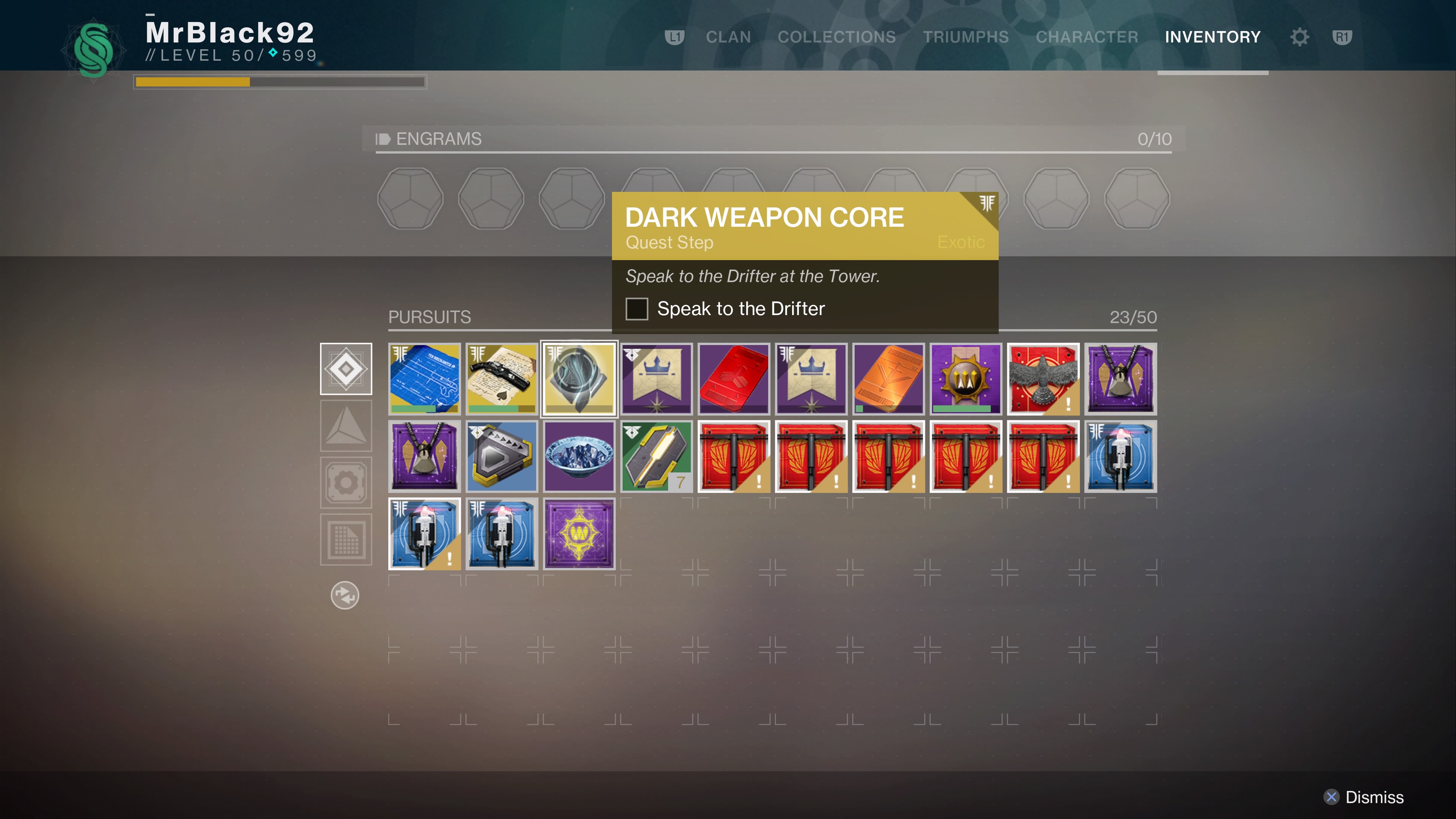 Once you completed the lights out quest step, head back to the tower and speak to the Drifter. He will give you the Malfeasance, exotic hand cannon for your “hard work” 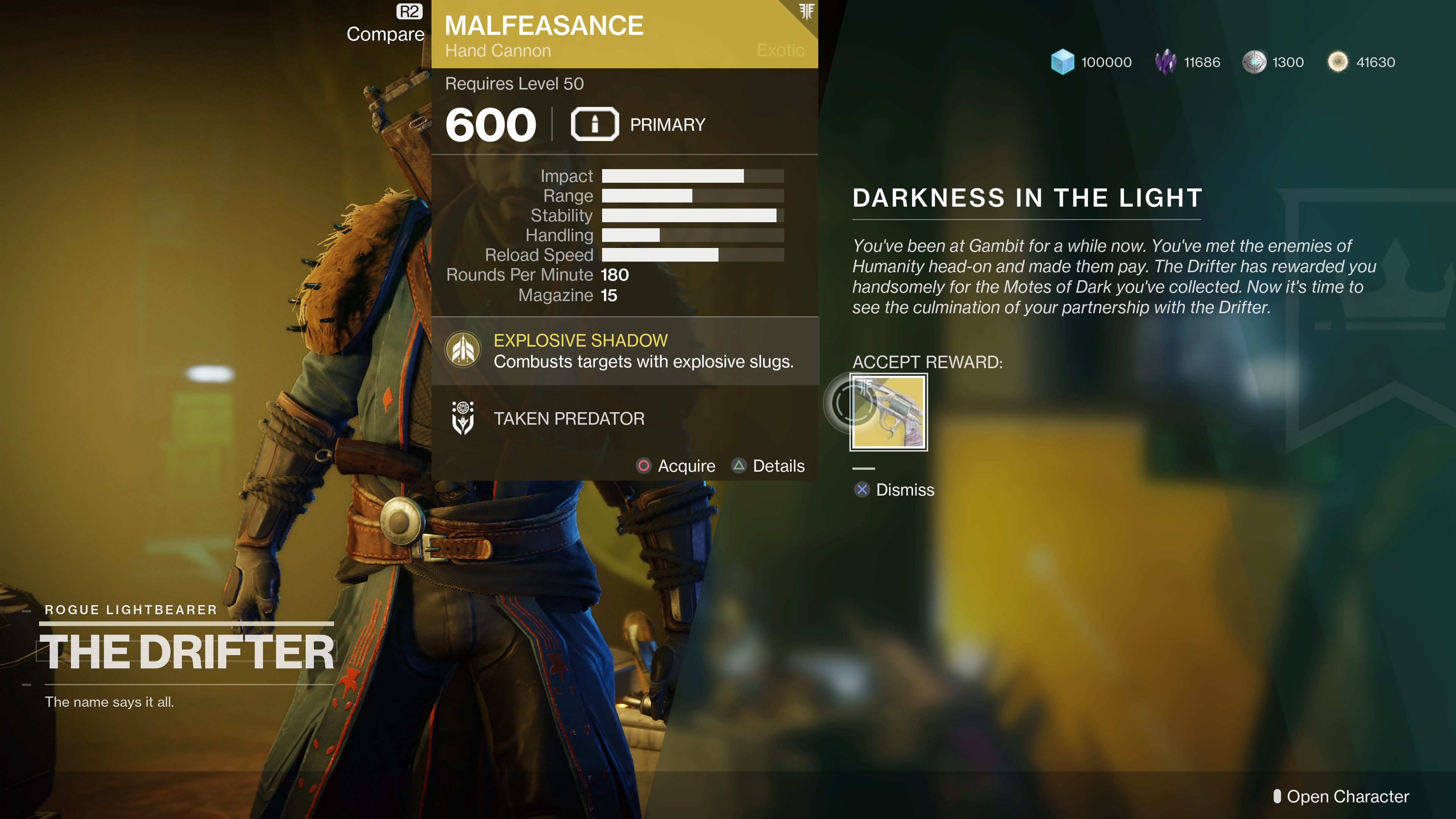 Malfeasance is a 180rpm hand cannon which performs quite well in PvP as well. Its intrinsic perk “Taken Predator” which deals bonus damage to taken enemies and gambit invaders. May be useful just to have fun but definitely not strong enough to replace sleeper simulant, queen’s breaker bow or 1000 voices in Gambit. Besides that, consistently stacking 5 shots on a target will cause them to explode.

Lastly, that’s is all you have to know for the malfeasance questline. Enjoy grinding your infamy rank!

Also if you wish to read more about Destiny 2 stuff, kindly visit here.