The Menagerie: Getting All The Encounters Triumph 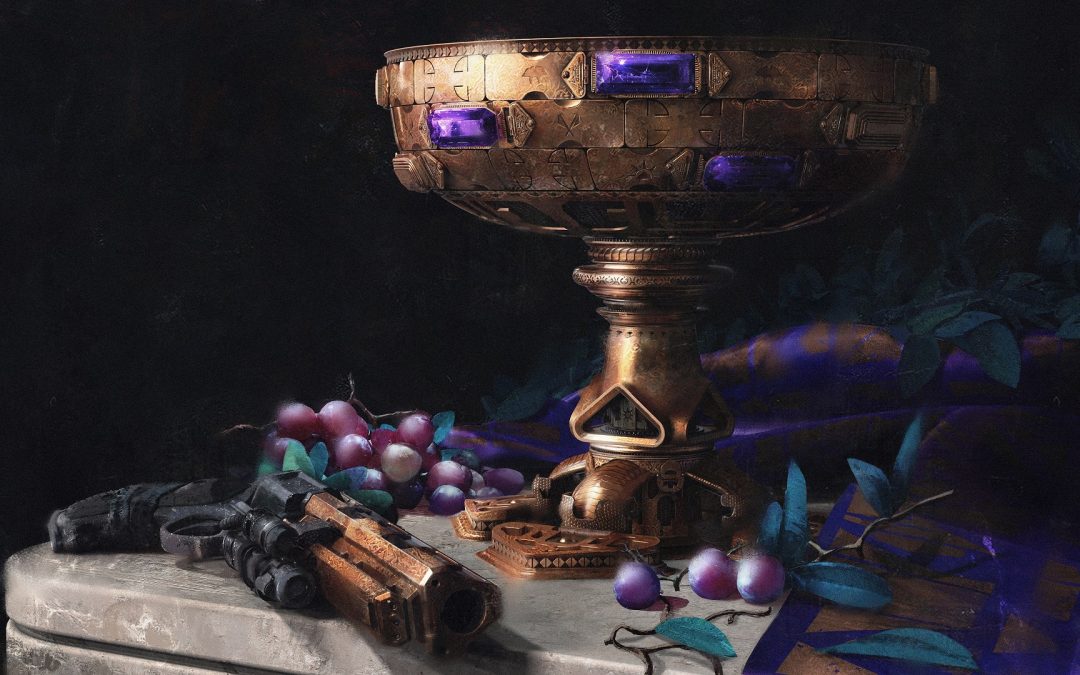 Menagerie is the latest 6 man activity that was released during the Season of Opulence. It is part of the DLC’s new content and this activity is going to take place back in the leviathan. As you progress in the activity, the power level for the enemies will slowly scales up to 740 so try to get close to 740 to beat this activity with ease. What makes this activity unique is that every time you go into the menagerie, there is going to be different type of encounters. Every encounter has its own objective. Thus, being able to clear the encounter with time left will rewards you a triumph.

For every related menagerie triumph you get, you will be rewarded 500 imperials. Imperials is the currency that you need to upgrade your chalice. You can earn imperials through activities such as strikes, gambit, crucible and the chest on menagerie. The chalice of opulence is an item that you can upgrade as you get more imperials. You can use it forge weapons or armors by slotting different combination of runes. The more upgrade you have, the more runes you can obtain. Hence, more choices you will have. Lastly, there are 3 different bosses in the menagerie and it will be on weekly rotation basis and heroic mode will be release later on. Here’s the encounters that is on menagerie: 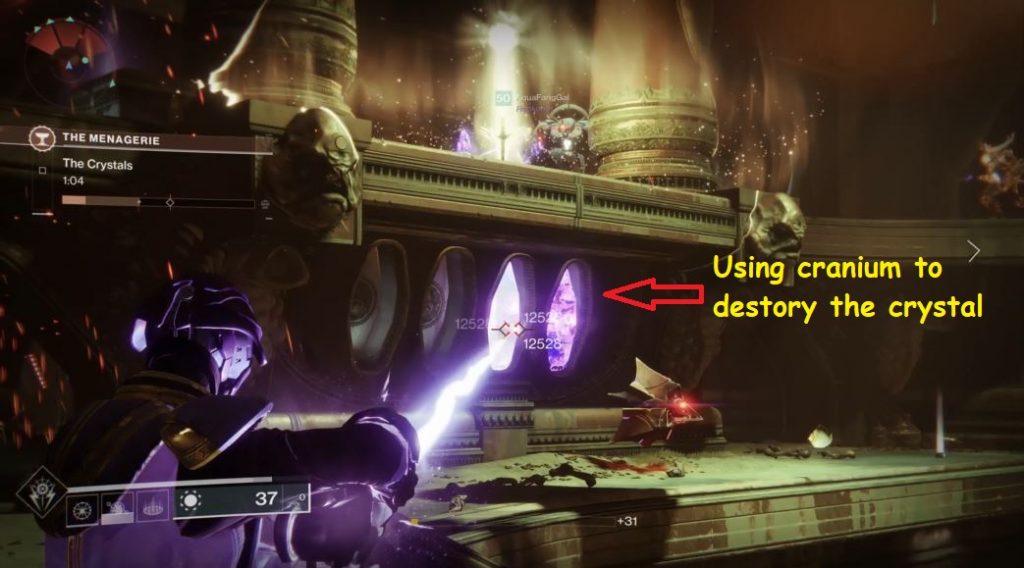 This encounter requires players to kill the harpies to get the cranium. After that use the cranium to destroy the crystals that spawn in either side of the room. You will need to repeat this for 3 times until the boss comes out. Successfully killing the boss with time left will unlock the “time manipulation” triumph. If you still need imperials to upgrade your chalice, getting all these triumphs done will help speed up the process for. 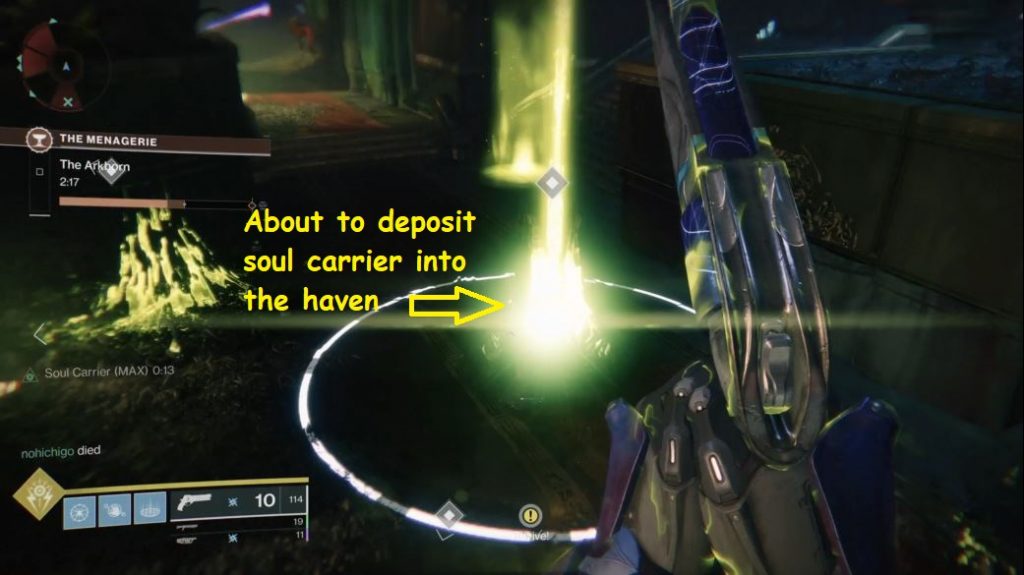 The arkborn is a pretty simple encounter, in fact this could probably be one of the easiest encounter among all in the menagerie. There will be “haven” that spawn in either red room, middle lane or green room. Haven is a statue that let players to dunk soul carrier into it. 2 haven will spawn at the first two waves until 3 haven spawn at the final encounter. When there’s 2 haven, the fireteam can be split into 2 groups and split into 3 groups when there’s 3 haven spawn. All you got to do is run around the map and collect the soul carrier, you can collect up to 3 souls and you will have to dunk into the haven. You got 15 seconds to dunk before you run out of time and die. Finally, successfully completing this encounter with time left will unlock the “faster than lightning” triumph. 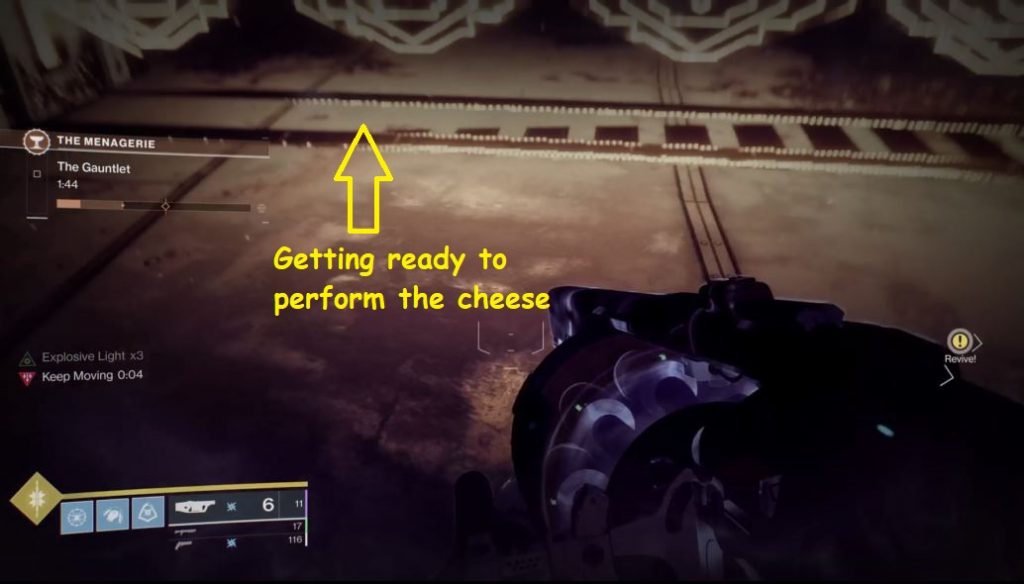 Gauntlets encounter requires all 6 players to successfully reach the finishing line for 3 times. For this encounter there are 2 separate triumphs which are “chariots of fire” and “going the distance”. If you and your team complete a run in the gauntlet where all six players complete any lap together will unlock “chariots of fire”. As for “going the distance” triumph it requires all six players to complete all laps with perfect score. Which is difficult if your teammate is bad at jumping. And that’s the legit way for getting the triumphs for this encounter. However, currently there’s a cheese to get this triumph whereby you only need 1 person to make it to the finishing line and kill himself/herself with grenade launcher. That will be counted towards the triumph. Kills the enemies and boss and repeat this for two more times and you shall get both triumphs complete. 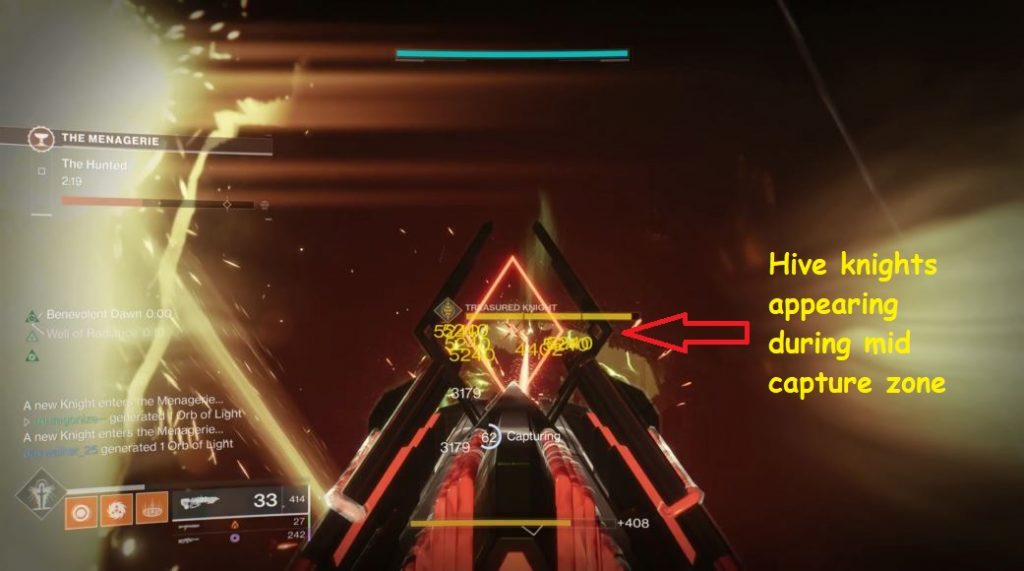 The hunted encounter is all about capturing zones while killing the treasured knight fast. Sometimes it can be only a capture point or 2. If it’s two zone to capture, it’s best to split the team into two groups. That way you can save time and use it to kill the knights. Upon successfully complete this triumph, you will get the “The Hunted Becomes The…” triumph. 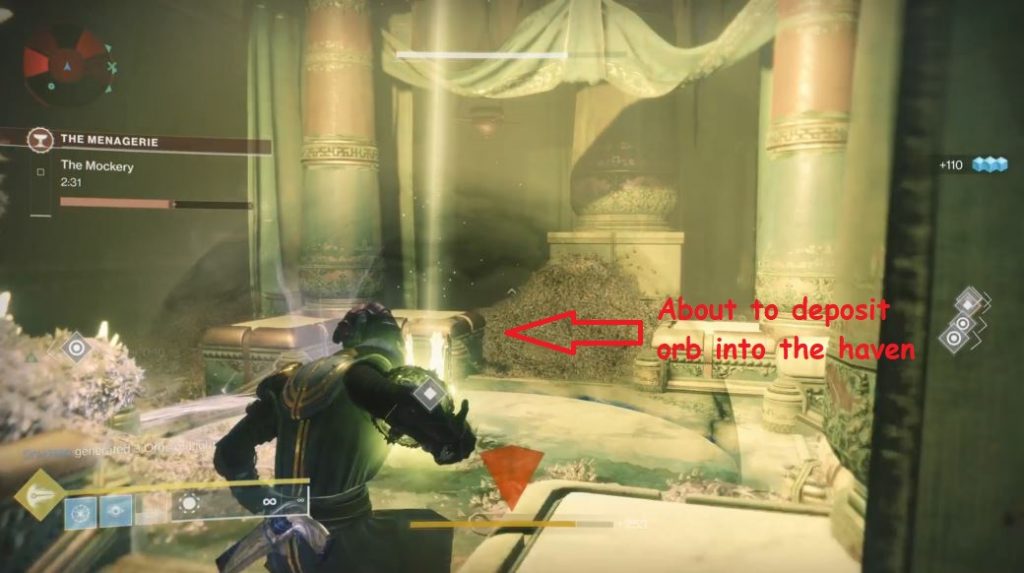 This encounter is pretty similar to arkborn encounter. Instead of collecting soul carrier, this time you will need to kill the hive wizards to grab an orb and dunk into the haven. The haven will have a certain time limit on it before it’s destroy completely and as such you won’t be able to get the triumphs anymore. You need to keep on dunk the orb into the haven the expand the radius of the haven which will prevent you from losing health. The faster you dunk, the faster you will fill up the haven. Keep repeating until you see the message saying that the haven has been filled. As a result, orges and wizards are going to spawn. Those are the bosses for this encounter and you will have to kill it quick. Lastly, successfully complete this encounter with time limit on and you will get the “safe haven” triumph. 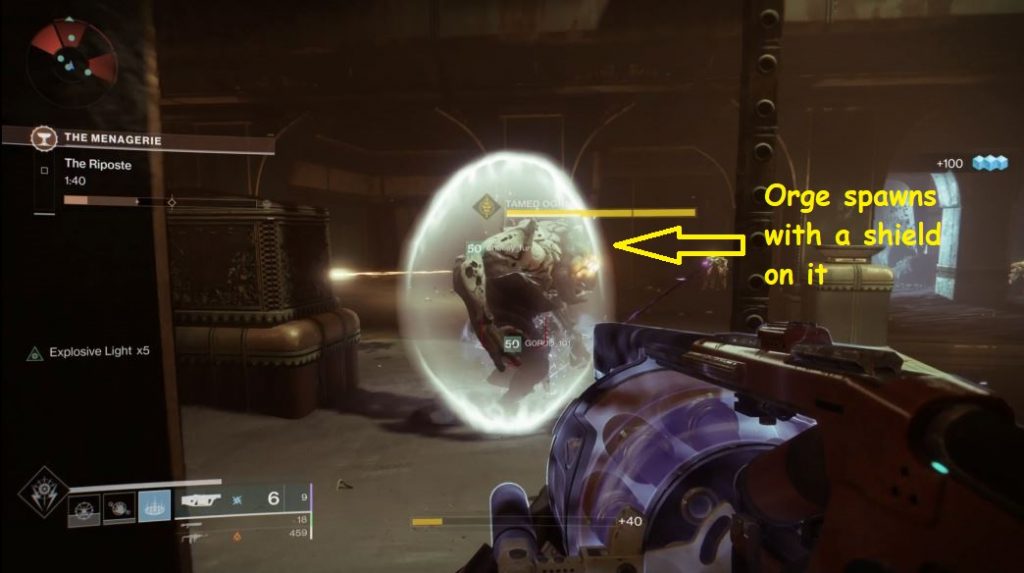 For the menagerie activities there are only 3 bosses and they are on rotation basis. The bosses are Pagouri, Hasapiko and Arunak. The rotation will start from hasapiko, arunak then finally pagouri. In case, you’re still in need of imperial seals then completing the triumphs on these bosses will give you 500 each.

First of all, the “Divided We Conquer” triumph from Hasapiko requires only a person to break the shield. You will not get the triumph if you have more than a person breaking hasapiko’s shield. Next, “Eyes Only for You” triumph is from Arunak which requires you to kill it without killing any of the hive knights that spawn. The safest way to do this triumph is to 1 phase the boss and with proper group set up you can definitely get it.

Finally, “Come Out and Play” triumph from Pagouri requires you to teleport the boss once at least to left, middle and right side before killing it. If you happen to summon it onto the same side twice then you will fail to get the triumph.

Heroic Menagerie was released after the three boss rotation on the normal menagerie. This activity is set at 770 power level and extinguish modifier is always active. Extinguish is the modifier that send your entire team back to orbit if everyone dies. Thus, making this activity a challenging yet rewarding activity to do.

Similar to normal menagerie, there are three triumphs which requires your entire team to be flawless to achieve it. It is also part of the requirement to get the shadow seal complete. So, for those who are going after the seal it is recommended that you get it before the boss changes on next reset. You will have to wait for next rotation if that happens.

Lastly, upon a first successful heroic menagerie run, you will get an emblem. Not only that, the boss has a chance to drop the ship as well as character based sword.

This is the flawless triumph from Hasapiko which requires you and your entire fireteam to be flawless. Our group decided to use the sword start as to block the lethal walls. We find it to be pretty good especially when you have well of radiance on. While other groups may prefer to use titan bubble, shooting the hand to make the wall non-lethal or even jumping around to dodge the wall. Use whichever strat that you’re comfortable with.

Below will be the showcase of video on how our group did it:

Uncontrolled Rage triumph is only obtainable through the second boss in the heroic menagerie. It requires a flawless run which means no one in the fireteam can die. Otherwise you will fail the run indirectly. Among the three bosses in the menagerie, Arunak probably considered the hardest among all. Firstly, it’s 770 power level activity and the orge blast melts you instantly if you don’t take cover.

Here’s the breakdown of our team setup:

Click the video below, and see how our group do it:

“Lambs to the Slaughter” triumph

The third and final flawless triumph that you need in order to get the shadow title. This triumph can only be acquired from the third menagerie boss, Pagouri in heroic mode. In terms of difficultly, this boss is similar to Hasapiko (the first boss). The only things that you have to watch out is the cyclops, minotaur and self destruct harpies (only spawns during boss dps phase). They are all 770 power level which means they can easily kill you if you don’t engage them smartly.

Here’s the breakdown of our team setup:

Click the video below and see how our group beat it:

If you wish to read more about Destiny 2 related stuff then you can go to here: