Beat The Valkyries: The Only Guide You Need

Everything You Need To Know About The Valkyries

In the latest god of war game, the valkyries is an optional boss in the game. They are all located in the hidden chamber of odin which players will discover as they explore places around the map. This hidden chamber are locked by a magic seal and can only be unlocked by giant’s chisel. Players will get this magical giant chisel later on in the game.

With this magical item, Kratos will be able to break the seal that is preventing you to explore behind the hidden chamber of odin doors. Don’t worry about the doors if you missed it on your playthrough. The locations will be revealed on the map after players completed the game.

How Many Valkyries Are There?

There are a total of 9 valkyries in the game. The first 4 you can find as you explore places around the lake of nine and the other 4 are located in the realms. Specifically one in Helheim, Alheim, Muspheleim and Nilheim. The Queen is the 9th and you have to defeat all the other 8 valkyries first before you can fight her.

Location: Thamur’s First valkyrie that you are likely to encounter. It is also the easiest among them. A brief introduction on what kind of enemy valkyrie are. Her chamber is right next to the area that you got your magical item. Most of her attacks can be parry or block.

Attacking Pattern #1: She will charge towards you with her scyther. Get ready and parry her attack as she closes the gap.

Attacking Pattern #2: Use your shield to block her wing attacks and parry her scyther when the yellow indicator prompts.

Attacking Pattern #3: A 3 hit combo follow by her wing piercing attack. After blocking three wing swings, dodge to the side when red indicator prompts. Red indicator is a heavy attack. Can’t be block or parry.

Attacking Pattern #4: Similar to attacking pattern no.1 instead she’s airborne. Wait for yellow indicator and parry as she closes the gap.

Location: The Mountain The battle takes place in quite a narrow area. She only has few attacking pattern. One of her attacks could actually smoke the whole area if you fail to stop her in time. This puts you in a vulnerable state.

Attacking Pattern #1: Uses her wing as a shield. Once opens up she will immediately use piercing attack. Be sure to dodge on time. While she’s in her shield you could actually use any of your rune attack to break her out. (I only found out when I fought the queen)

Attacking Pattern #2: Similar to attacking pattern no.1 instead once she opened up her wings, she will attempt to charge at you with 2 hit combo. Be sure to roll out from that yellow circle and immediately dodge her second attack.

Attacking Pattern #3: Use the shield to block the 4 hit combo from her wings and dodge to the side when the red indicator prompts.

Attacking Pattern #4: In airborne, she attempt to cast an explosion with her scyther. The explosion has a large AoE so signal atreus to shoot her when red indicator prompts to prevent her from executing the attack.

Location: Helheim Realm Valkyrie Rota is quite an easy opponent to fight. Has only few limited attacking patterns. Whenever she screams valhalla be sure to dodge.

Attacking Pattern #1: Throws three disc like trackers to throw at you follow up by three consecutive dive bomb attacks. Block the disc trackers with your shield and if she attempt to dive bomb be sure to dodge out of her sight. It deals a lot of damage if you get caught by her.

Location: Alheim Realm Quite a challenging fight on your first attempt. This valkyrie only has few new attacking pattern.  Tends to move in a L shape movement. The rest is pretty similar to others.

Attacking Pattern #1:  Closes the gap in high speed and she will turn her wing like a whirlwind. Use your shield to block.

Attacking Pattern #3: While in the whirlwind state, she tosses a few sharp rocks toward you. Be sure to block it with your shield. Her follow up attack is similar to gunnr’s three hit combo follow by a piercing attack from her metallic wing. You know what to do here.

Attacking Pattern #4: Same as attacking no.3 you can actually parry the rocks and send it back at her. Right after the whirlwind attack she immediately moves in L shape movement and attempt to pierce with her metallic wing. Personally I wouldn’t recommend to parry the rocks as it can leave you in a vulnerable state within the time frame if you can’t react fast enough. Whilst blocking you have more time to observe the movement and react.

Location: Witch’s Cave Valkyrie Kara her hidden chamber is in the witch’s cave. As usual every valkyrie has their own speciality. For kara, she’s able to summon enemies to help her fight.

Attacking Pattern #1: Ability to summon up to 4 enemies to help her fight. Have arteus use his chain lightning attack and finish them off. They are quite an easy target. She will summon them again after you clear them out. On a side note, I’m not sure if keeping one enemy alive will actually prevent her from summoning?

Attacking Pattern #2: About the same as Rota’s disc like tracker attack. Instead, she combines them all into one and launches at you. This is heavy attack which means there’s no way to block or parry. Got to dodge them. At times, she will throw those three disc trackers at you. Those can be block.

Location:Foothills Nothing much really, most of the valkyrie are able to use combination of attacks from the past valkyries you had faced.

Attacking Pattern #1:  With the use of her scyther, she attempts to cast this flash shockwave towards you. Just dodge it.

Attacking Pattern #2: Seems familiar right? That’s right is the same as rota’s disc throwing attack follow by three consecutive dive bombs. But instead geirdriful only does one time of dive bomb. If you are confident with your ability to parry, you can attempt to parry the disc and send back at her. If successful she drops down and thus preventing her from executing the dive bomb.

Location: Muspheleim Gondul is located at the highest peak of muspheleim. Realm of muspheleim is pretty similar to the old challenges in god of war series. It is called trials of muspheleim and you have to clear every challenge from the bottom of the mountain all the way to the top. Her speciality is meteor attacks.

Attacking Pattern #1: Again this seems familiar isn’t it? It’s a combination of Eir’s explosion attack and screams vahalla. Only thing different is that she will attempt to cast a meteor down right as she screams valhalla. Be sure to dodge once you hear the word valhalla.

Attacking Pattern #2: In this attack she rain down three meteor before she does the quick piercing attack. Move out from the meteor’s range and dodge as she attempts to pierce you with her metallic wing.

Attacking Pattern #3: Same variation as the meteor attack instead she finishes her move with vlahalla scream. Move out from the meteor range  and be ready to dodge as she screams valhalla.

Location: Nilheim Your last valkyrie boss to fight before you face the queen. This valkyrie is located on one end of the poison mist. In nilheim realm as long as you are in the mist you will have certain time limit that you can stay in the mist before the timer runs out. It’s not that difficult compared to some you’ve faced. Her special ability is ice attack. Other than that, the rest is pretty much similar to others.

Attacking Pattern #1: Casts sharp ice cubes to constantly attacks you and one large sharp ice cube at the end. Block the small ones with your shield and dodge the big one. 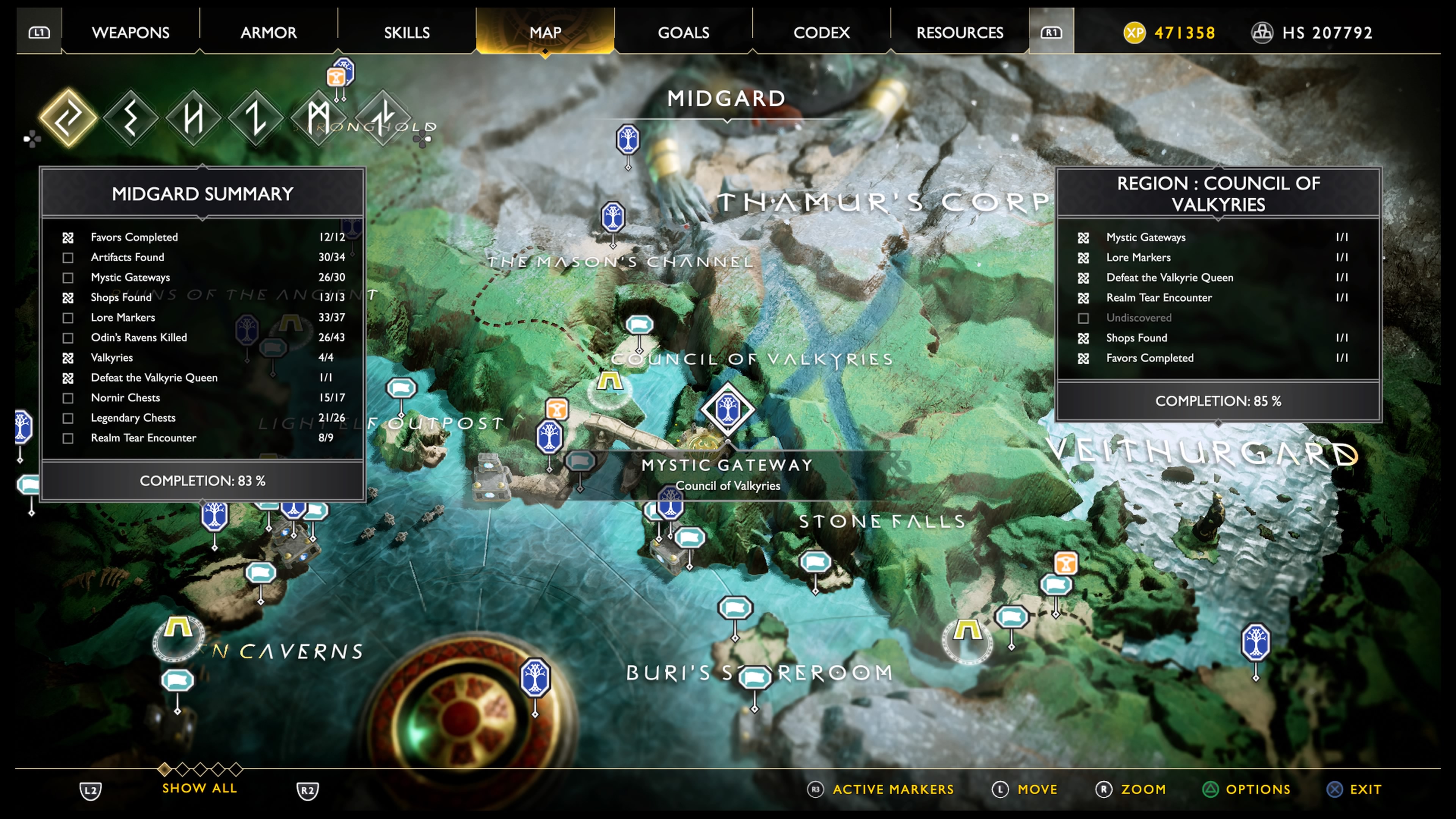 Well, head over to the council of valkyrie. Fast travel through the mystic gateway once you unlock it. Upon arrival at the location, place each helm of fallen valkyrie at each seat. Mimir the head will speak some historic background about every one of them. If you are into the lore, you will love it. Once you placed every helm on the seat a realm of tear will appear. Guess what? The Queen Sirgun is inside the realm of tear.

This is how you initiate the battle with the queen. Pretty cool way of making an appearance isn’t it?

The toughest boss fight that you will encounter in the game. Being the queen of valkyries grants her the ability to use all the attacks from the previous valkyries you have fought. However when I fought her, she doesn’t use the meteor and summoning attack. 99% once she does that spinning atack she’s immediately does the vahalla attack without the scream itself so watch out. It can be 1 or 3 times which is random. Be sure to dodge on time.

Tips On Fighting The Valkyries

Setup that I used when I fought the queen was: 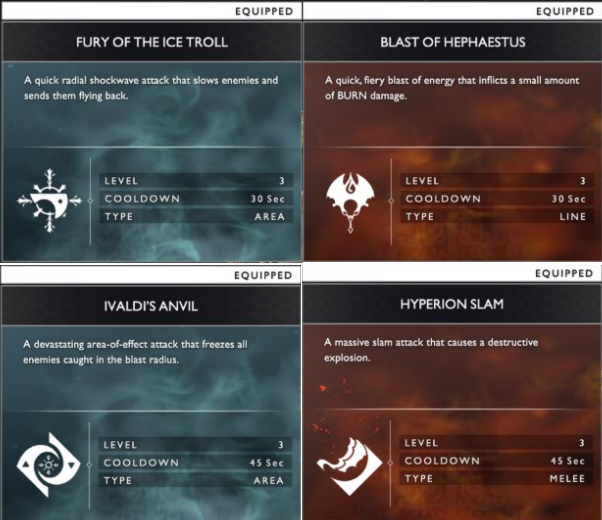 For my runic attacks, I usually starts off with ivaldi’s anvil and follow by fury of ice troll. This 2 attacks are good in terms of stunning sigrun. I then use blast of hephaestus to shift realm and finish up my attack with hyperion slam. All this could inflict lots of damage on her.

This is a very good talisman to use. At max upgrade realm shift last for 6 seconds. What it does it is slows down enemies within that timeframe. Also, within the timeframe you are able to execute all your runic attacks on sigrun without her escaping.

Sometimes sigrun drops health burst on the ground, you can use the timeframe to pick up the health burst and give yourself some health. If you’re interested in watching the fight, did not go exactly the way I want it but I managed to defeat her. There you go enjoy the video!

This bring us to the next question Why Do You Want To Fight All Valkyries? 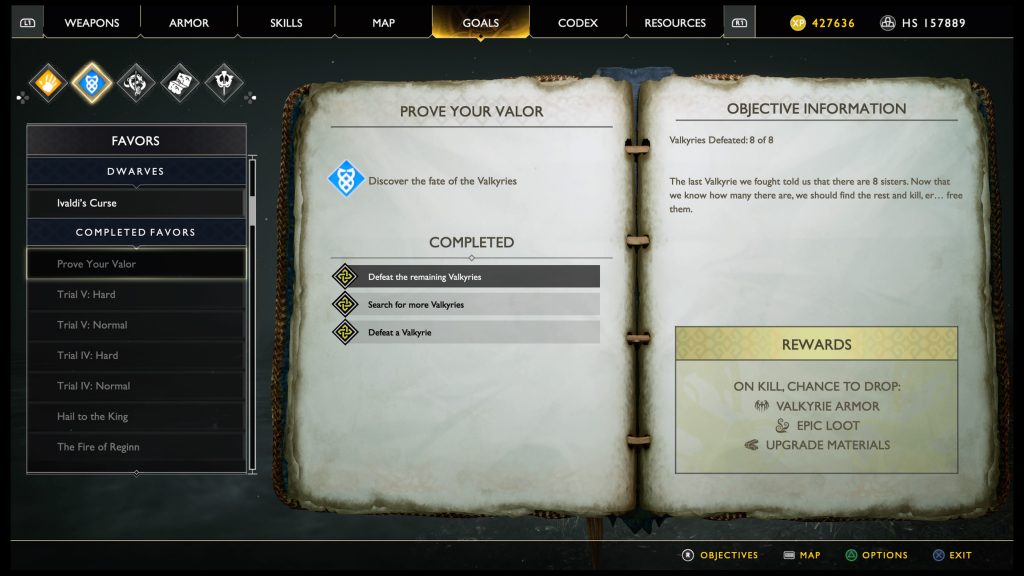 Well the rewards says it all, every valkyrie will drop epic loots after you defeat them. The loots are very powerful and can be consider as end game armor for kratos. Upon completing the quest, I’ve managed to collect full sets of valkyrie armor, talisman, and grips for both my weapons.

For people who seek for more challenging stuff, this quest is worth doing it. It’s very punishing for making mistake in the fight but at the same time you’re being rewarded handsomely. For those trophy hunters, finishing this quest will gives you a gold trophy which you need in order to platinum. That’s it everything you need to know about the valkyries and the quest.

I wish you good luck in your battle!

After you defeat the queen sigrun, she told kratos that she wasn’t the queen of valkyrie. Freya was the actual queen of valkyrie but odin severed her wings. Right after kratos and arteus spread faye’s ashes in the mountain peak, mimir told kratos that freya came to visit and ask her where could possibly odin hide her wings. In the fight with baldur (freya’s son), kratos killed him and freya vowed to take revenge on them. Could this possibly be a potential DLC story in future? Still have 3 more realms left to explore and are being locked at the mean time.