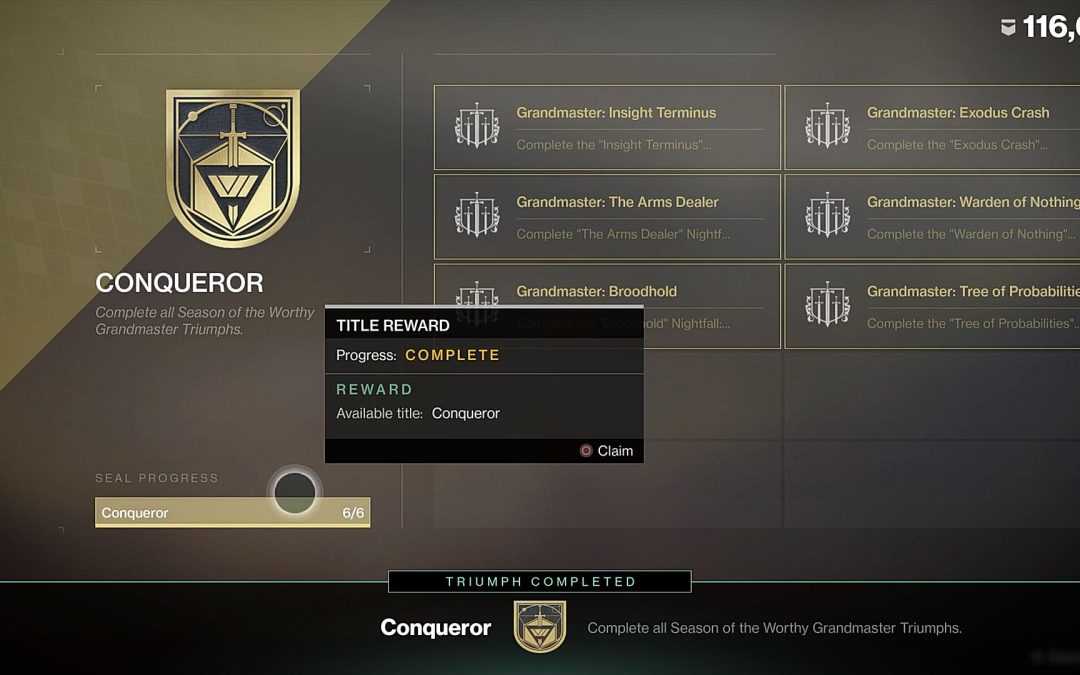 First off, grandmaster nightfall is a 1050 power level activity while all players will be cap at 1025 power level. This is what we known as “contest modifier” which Bungie used during day 1 raid race. In addition, players will spawn with four resurrection token at the beginning of the activity. The only way to earn additional token is to defeat champions. You earn one token per champion defeat. Lastly, what makes this even intense is the “extinguish modifier” being active all the time. Meaning everyone will be sent back to orbit if everyone is dead in the fireteam.

Here’s the list general mods is proven useful for the nightfall:

The armaments and season of the worthy mods are merely optional. Not required but will be helpful if you’re being able to use it. In comparison to the champions that is a necessary must to have. Otherwise you will not be able to clear it. Finally, being flexible with the characters and loadouts will definitely help to increase the success of your nightfall run.

Videos shown below will be showcase of all grandmaster nightfall runs and weapon loadouts:

Broodhold nightfall consists of mainly hive enemies so having hive armaments will make sure you don’t run out of heavy ammo. As for the champions there are only unstoppable and barrier in it. Bear in mind that weapon loadouts are always flexible as long as your team covers the champion mods among yourselves.

Trees of probabilities in general isn’t a long nightfall simply because you could literally skip the whole infinity forest part. There are only anti-barrier and overload champions in this nightfall. After trial and error runs, we discovered that using bubble titans with swords are effective in taking down the boss and champions in the tight room. That being said our sword is equipped with disrupting blade mod and passive guard mod. In addition to that, having minor and major mod further helps in taking extra hits from the enemies.

Arms Dealer nightfall by far is the easiest nightfall among the six simply due to being able to cheese the boss at the end. In order to cheese the boss, you will need to have one of your teammates running a grenade build void lock with contraverse hold gauntlet. What you want to do is making sure you damage the boss enough to make him gone up to the pillar and pop the barrier shield. You can then charge your grenade and throw it underneath the platform. Apart from that, there are only unstoppable and anti-barrier champions for this nightfall.

Our team’s setup and weapon loadouts:

1050 Warden of Nothing Grandmaster Nightfall

Warden of Nothing is the second easiest nightfall on my list after arms dealer. The difficult part would be making towards the boss room as there’s a lot of champions around the dismantling mines area and at final room. There are two cheese spots that you can use depending on which one you prefer. Besides that, there are unstoppable, overload and anti-barrier champions in it. I had this terminology called “champions war” for only this nightfall. Due to the champions being cabals and vex, you can see them fighting against each other quite often throughout the nightfall.

For this champions war, unstoppable and overload will always fight against each other while the same thing for barrier (vex barrier champions vs cabal barrier champion) too. You get to see them on the area where you got to dismantling mines and at final room. With that, we came up with the strategy to always take out the anti-barrier champions first while leaving overload fighting against unstoppable.

Similarly to broodhold, exodus crash is a fallen based nightfall so having fallen armaments definitely useful for this. There are anti-barrier and overload champions for this nightfall. The numbers of champions spawned during the area where you got to defend the ghost is highly concentrated. As long as you play your live smart, you will able to build up a lot of revive tokens. We find that having one ursa furiosa titan and two warlock with phoenix protocol to be the strategy to go for this nightfall. Last but not least for those who don’t know, you can actually damage the enemies protected by anti-barrier servitor while you’re in the well of radiance.

Take a look at our setup and weapon loadouts:

The last and final grandmaster nightfall for the conqueror title is the insight terminus nightfall. In a glance, this nightfall is not difficult but rather kargen has a lot of health. The champions for this nightfall are mainly unstoppable and anti-barrier champions. Also, the only shields you need to worry about is only void shields.

Here’s our setup and weapon loadouts:

Well that’s all the tips and setups that our team used to beat all the grandmaster nightfall. If it works for us, I can guarantee it will work for most of you all. It’s not necessary to follow the weapon loadouts that my team used but bear in mind to cover all the champions mod in any nightfall you do. With that I hope you will get your conqueror title in no time!